Posted on December 19, 2018 by thebloggergirls

Jens cannot stop. He just can’t. It’s there in his head all the time. Every second of the day. Even when he tries hard to concentrate and be all adult about it. He thinks about it all the time.

And Axel. And the way his skin felt under his fingers. The way his hair stroked against his cheek. The way his mouth felt on his body. The way he held him tight after he came. After he released. After he let himself come into Axel’s mouth. Oh fuck, he gets all embarrassed just thinking about it. He doesn’t quite know what the etiquette is these days, should he have asked? Should he have apologised? He had done neither. He is such a dork. It was still hot as hell. Sexy as fuck.

See? He is doing it again. He is sitting at his desk and his colleague has just walked in, and normally Jens would half stand up and shake his hand.

I mean it’s only polite. He hasn’t seen Sondre for a few days and a handshake would have been his usual thing. They’re colleagues. Well technically Sondre is the Head of the Norwegian language department, but they have worked together for years and apart from that he is the closest thing to a friend Jens has these days. It shouldn’t be awkward, but here Jens is, sitting down with a flush of red across his cheeks as he reaches out to grab the prospectus that Sondre has handed him, half-heartedly trying to concentrate on what he is saying.

It’s not the first time this week. He jumps every time Sylvia walks through the door. Well, it was bad enough on Tuesday when she almost caught him reading an article on ‘How to Give Good Head: A Beginner’s Guide’ that he had found on the net. He deletes his browsing history and closes all his tabs. Like every five minutes. Then he opens them up again. He needs to reread that article on ‘How to Kiss Like a Man Needs to be Kissed’, the one he slammed shut so fast on his laptop that he accidentally deleted a student’s entire profile. He fixed it in the end, but it was a close call with a random person suddenly standing behind him in the lecture hall.

“So, can I count on you to attend this year, Jens? It wasn’t the same without you last year and your expertise is much needed in the poetry section. We ended up awarding the best poetry book on a whim and it didn’t feel right. You know this stuff better than anyone else, and you will have read all the new releases, so will have a good grasp of who we should nominate and discuss.”

“Uh?” Jens is looking blank. Well, his mind is racing. Fluttering between the way Axel’s face relaxes when he sleeps. The way his eyelashes curl against his eyelids. The small sounds he makes. Snuffles in the dark. And… Oh yes. Sondre. “The Norwegian Literary Awards. Yes. Where did you say, the meeting is?”

Jens is randomly shuffling paper on his desk. Trying to find something. He hasn’t got a clue what.

“Stavanger. Three days and two nights. Press and author meets, as well as sessions to discuss and evaluate. We need your nominations next week. Jonathan is booking the accommodation now, so can you let me know? Can I count you in?”

It’s frightening how much he misses Axel when he is not there. Because Axel has been working. Axel has been running courses in the evenings and Jens hasn’t seen him since Monday night when he left for work and in a way, Jens is dying.

Monday had been an absolute blast, and as usual Jens had given in. Been the worst father in the history of useless fathers with no willpower. No following through on the rules he had set himself.

He had brought Axel with him to collect the little ones, walking hand in hand through the park over towards the nursery. Holding Axel’s hand and letting him reach for him and letting Axel kiss him right there. On the path. With people walking by. And Jens had loved it.

He had felt his chest swell with pride as they walked through the gate to the nursery and Mikki had come running across the playground shouting, “AXEEEEL!” Letting Axel lift him up for a hug. Jens had grabbed Marthe, slung her in the backpack carrier, and they had walked into town, Axel and Jens, swinging Mikki between them doing the ‘One! Two! Three! Jump!’ game until their arms were hurting and Mikki was squealing and begging for “Just one more time!”

The movie had been fun. Marthe had fallen asleep before it even started, and the kids all had popcorn. And Coke. Followed by McDonald’s. Jens needs to get a grip. Jens needs to learn. Jens needs to stop letting his children get their way. But then they had all been laughing, poking fun at Axel, sharing their french fries  and asking to taste Axel’s stupidly sugary coffee concoction drink that he had ordered. All of them trying it and squealing in disgust.

It had been like being a family again. He had been able to relax, without the constant pressure that it was all on him. That he had to rein them in. Make sure they behaved. Shout at them to sit down. Don’t move. Eat up. Let’s go. It had been fun. And Jens had been so proud. Jens is still proud.

Jens is so in love with his little family that is slightly ridiculous as he sits at his desk and wonders why he hasn’t got any recent pictures of the kids in his office. Malena’s school photo is from grade four or something, all pigtails and freckles. He also needs to have a photo of Axel here, to remind himself that all this is real. That it’s not just a figment of his imagination, or some silly daydream in his head.

He does have his wedding photo on the bookshelf. A yellowed faded photograph of a young skinny-looking Jens with his hair slicked back and a grin on his face, looking lovingly at a younger version of Sofie. Bouncy hair and flowers and too much make-up in that dress she had loved.

He can’t help looking. And she is looking back. And Jens smiles. He somehow feels okay, knowing that Sofie would laugh. Sofie would find him hilarious. Ridiculous even. She would have stood there in his office, leaning back against one of his overstuffed bookcases. Cup of coffee in her hand. Glasses perched on her head and laugh lines around her eyes.

“You’re still making a complete mess of everything Jens.” She would have said. “Are the kids eating their five a day? Do you actually buy fruit for them? Thank God for nursery. At least they eat nutritionally balanced food there.”

Yes. Jens knows. He cancelled the whole ‘Fruit and Veg’ section on his online food shop months ago, since he was just throwing the whole bag in the bin every week. Except bananas. The kids go through a ridiculous amount of bananas.

“Go and see Axel.” His imaginary Sofie says. “You know you want to. You can catch up with work later. Go find him. Get yourself a hug. Some love. You deserve it sweetheart.” And she smiles. She smiles and drains the last drops of her coffee.

Jens knows. He knows he has essays to grade. He has books to read. Research to consider. Lectures to plan. He knows. He should also get some new work trousers and some kind of control inducing jockstrap. Because now he is thinking about Axel again. What Axel’s bum feels like when Jens squeezes it through his trousers. And Axel wears these skinny black jeans that just do crazy things to Jens’ brain. Axel is sexy. Axel is ridiculously sexy.

Jens thinks he wants to just grab him. Be a little bit rough. Not in a bad way, but Jens wants to slam him against the wall and kiss the living daylight out of him. Rip his jeans open and palm his cock under his cotton briefs. He wants to put his mouth on Axel. On all of Axel. Yes, even there.

He wants to taste what Axel tastes like. Lick. Touch. Palm. Taste.

Jens is ridiculous. Jens is hard. Jens needs to get a grip. 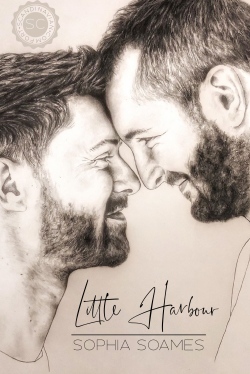 This is a story about life and death. Because there has never been anyone else for Jens. He had been with Sofie almost all his life, from the day they met at school when they were fifteen, until the day she took her final breath against his chest. She was always everything to him. As he was to her. He never doubted that. Not for a minute.

This is a story of hope, where Axel Kleve keeps himself too busy to even stop and think. Work, sleep, eat, repeat. He loves his job as a Midwife at Oslo’s University Hospital,  He’s good at lecturing and training, and now he has somehow been pushed into running “Ask Axel,” a midwifery blog on PNN.no, the parenting-site everyone in Norway trusts.

This is a tale of second chances. Jens, he doesn’t let himself think of Axel. He doesn’t think of Axel at all. And Axel needs to stop longing for that one crush he’s never been able to leave behind. It’s just plain ridiculous. He should have got over Jens Sommerfeldt years ago.

A song about family and love and happiness found in small doses. Of trying to parent when you don’t know how. Of finding love where you always knew it lived.

This is the story of a little harbour. The place in your heart you didn’t know was there.

Sophia Soames should be old enough to know better but has barely grown up. She has been known to fangirl over tv-shows, has fallen in and out of love with more popstars than she dares to remember, and has a ridiculously high-flying (un-) glamourous real-life job.

Her long-suffering husband just laughs at her antics. Their children are feral. The AuPair just sighs. She lives in a creaky old house in rural London, although her heart is still in Scandinavia.

Discovering that the stories in her head make sense when written down has been part of the most hilarious midlife crisis ever and she hopes it may long continue.

Come and enter a super chilled Scandinavian style laid back competition. Just sit back, follow Sophia on social media if you wish, and enter to win a cozy Little Harbour inspired  ‘Hygge’ pack featuring a Little Harbour printed tea towel and an Amazon £10 gift card. And it wouldn’t be Scandinavian without FIKA, so I will throw in a $5 Starbucks gift voucher too. How is that for a relaxing prize?

Competition ends December 22 and 3 (yes 3!) lucky winners will be drawn to win a Hygge pack each. Good luck!