Posted on December 29, 2018 by thebloggergirls

You. Forever. Always. by K.A. Merikan 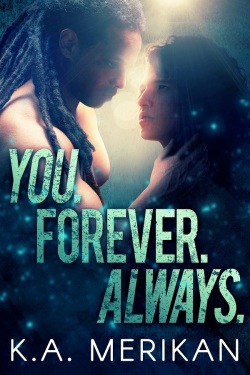 —Years of loving in secret. Now the secret’s out.—

Mage has always been Dawn’s hero. He’s been there for him when Dawn was bullied, when Dawn came out, and when he joined The Underdogs. He’s also been Dawn’s first and only love—painfully unrequited, since Mage is straight. But that’s only for the better, because they’re bandmates, and Dawn’s brother is Mage’s best friend.

It would all be too intense, too complicated, too real.

But then one drunken kiss proves Mage might not be as straight as he seemed, and their whole world turns upside down. Even though Dawn craves Mage’s love so much his heart could burst, his shyness stands in the way of any future they could share.

While they have to keep their budding relationship under wraps and they prepare to sign a major record deal, Dawn’s anxiety gets out of control. Mage will have to choose between the success he’s always craved and the love of his life.

K.A. Merikan are a team of writers who try not to suck at adulting, with some success. Always eager to explore the murky waters of the weird and wonderful, K.A. Merikan don’t follow fixed formulas and want each of their books to be a surprise for those who choose to hop on for the ride.

K.A. Merikan have a few sweeter M/M romances as well, but they specialize in the dark, dirty, and dangerous side of M/M, full of bikers, bad boys, mafiosi, and scorching hot romance.

As part of this blog tour, K.A. is giving away an ebook of Manic Pixie Dream Boy!! To enter, just click the link below!

One thought on “Release Blitz: You. Forever. Always. by K.A. Merikan + Giveaway!”