Exclusive Excerpt from Indulge Me

“I can’t believe that fucking bastard quit,” Bastian said in a huff, but Kian had known him long enough to know it was all defensive posturing. I can’t believe he left me, was what Kian heard.

“Wyatt needs the money. His grandmother is in a home,” Kian said quietly. “And this private chef gig pays really well.”

Being Bastian’s intern and being friends with Wyatt and Xander was a fine line to walk. He often knew more than he felt comfortable saying to his boss—things that his friends told him in confidence. Like that Xander’s new sauce recipe was almost directly lifted from a Tom Colicchio cookbook, or that Wyatt wasn’t going to be cooking for a socialite at all, but the only “out” player in professional baseball.

Bastian definitely didn’t need to know that there was definitely something going on between the baseball player and Wyatt.

“Probably,” Kian said noncommittedly in his most soothing voice. He leaned down and picked up the keyboard, which was missing a few important keys. This was the fourth keyboard they’d been through in the last year, and Kian had started buying extras because he might still need to place online orders for supplies and ingredients the day that Bastian decided to throw a hissy fit. They couldn’t run out of artichokes just because Kian didn’t have a keyboard.

Kicking a pen, Bastian slumped down into his chair. The anger had passed now, and they’d moved on to guilt.

“I shouldn’t have said those things. I just . . . saw red,” Bastian said hopelessly.

Kian set the broken keyboard on the chair opposite the desk. He maneuvered around the random detritus on the floor and took a chance by moving closer to Bastian than he normally allowed himself. Even took the risk of placing his hands on Bastian’s broad, muscular shoulders, emphasized by the cut of his white chef’s coat.

Bastian stared at him, and something inside Kian trembled. They didn’t often touch, because even a hand on a shoulder was dangerous, and Kian never initiated contact. But he did today, curling his fingers into the starched cotton of Bastian’s jacket, holding him steady as his own pulse accelerated.

“Maybe next time, we can figure out a way for you to only see . . . orange,” Kian suggested softly.

“I have a temper,” Bastian snapped. “It’s not going away.” He jerked out of Kian’s hands, and the moment broke, like an egg cracking against the edge of a bowl.

It would be nice if Bastian’s temper mellowed, but Kian was not laboring under any false impression that it would. Bastian’s temper was part of who he was; it was the product of the intense pressure he put on himself and on others to produce perfection every single day. It wasn’t ideal, it wasn’t always professional, but it wasn’t going away.

Still, if Kian could figure out a way to convince him to take a second to think before he acted, then maybe the collateral damage would be less. At the very least, Kian would end up needing fewer keyboards.

Leaning down, Kian began to gather up pieces of the coffee cup and the pens and pencils scattered over the polished concrete floor. Out of the corner of his eye, he watched as Bastian began to pace in the small space, his arms crossed across his chest, like the physical movement might contain what kept trying to escape.

“I just . . . Wyatt . . . he’s good,” Bastian said, and Kian glanced up to see that he’d stopped pacing and was staring at him, crouched on the floor.

“He knows it too,” Bastian muttered, like that made up for the insults he’d just spit in Wyatt’s direction.

“Yeah, he does. Which is partly why he’s leaving.”

Kian had gathered almost all the pens from the desk and was moving onto the paperclips sprinkled across the concrete.

“Here,” Bastian said, and Kian looked up from the floor to see the mesh paperclip holder held at eye level. He’d crouched down next to Kian and was also picking up paperclips.

This was by no means the first time Bastian had cleared his desk in a fit of temper, but it was definitely the first time he’d helped Kian clean up the mess.

Kian tipped a handful of paperclips into the container. “Maybe I should get one with a sealed lid,” he said, trying to use a bit of humor to distract him from the fact that Bastian was right there next to him, helping him. If he turned his head and leaned a little to the left he’d be pressed right against him.

It might not be an apology, but it was something.

Sighing, Bastian pushed back on his heels, observing the mess surrounding them with a cynical expression. “This life is hard.”

“Really?” Kian retorted sarcastically. “I had no idea.”

Bastian, who could be a sarcastic son of a bitch, ironically hated sarcasm in others, so he ignored Kian’s statement. “And this,” he gestured between them, “makes me tense.” 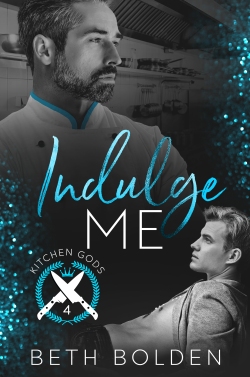 Throughout the restaurant industry, Chef Bastian Aquino is a notorious control freak. For two very long years, Kian Reynolds has worked for Bastian as his special assistant, doing whatever he and his restaurant needs. The toughest part isn’t even all the impossible tasks he expects Kian to complete flawlessly—it’s the hopeless, endless love he feels for his older boss.

Falling for someone so far above him might be agonizing, but at least his feelings aren’t unrequited. Bastian fell in love right alongside him, but at the very beginning, they made the choice to abstain for logical, smart, professional reasons.

But love isn’t logical, it isn’t smart, and it definitely isn’t professional. It defies containment, even by Bastian. While he watches Bastian struggle with their attraction, Kian finally comes to the conclusion that he’s done.

He’s done standing off the side, done not getting any of the credit, done letting Bastian define the boundaries of their relationship. Most of all, he’s done waiting.

A lifelong Oregonian, Beth Bolden has just recently moved to North Carolina with her supportive husband. She still believes in Keeping Portland Weird, and intends to start a chapter of Keeping Durham Weird.

Beth has been writing practically since she learned the alphabet. Unfortunately, her first foray into novel writing, titled Big Bear with Sparkly Earrings, wasn’t a bestseller, but hope springs eternal. She’s published eleven novels and four short stories, with Indulge Me, the last book of the Kitchen Godsseries, releasing in spring 2019.

As part of this blog tour, Beth is giving away a $25 Amazon gift card!! To enter, just click the link below!

Don’t forget to check out Nikyta’s review of Indulge Me to see what she thought of it!