Posted on May 7, 2019 by thebloggergirls

Exclusive Excerpt from The King’s Fear

Kitsune’s sword ground against the rocky wall of the hallway. A girlish laughter rang in his ears as sparks flew off the blade. He grabbed a hold of the bits of fire with his mind and, spinning about, threw out a roaring ring of flame. His rage fed the magic, and he had days of pent-up wrath. The fire moved across the walls, ceiling, and floor like water in a riverbed, and columns of fire connected the ceiling and floor. Everything outside of a two-footfall radius of his body was consumed by the deadly, heated air.

The woman had either anticipated his actions or was incredibly lucky. Inside the safe area about his person, she stood directly in front of him, the flames outlining her figure. Their two noses were only a finger’s width apart as she stared into his face.

“Don’t want to know my name before you stab me?” She moved forward, opening her mouth. Kitsune thought she was going to bite into his cheek, but she instead stuck out her tongue and licked it. Leaving behind a trail of saliva, she whispered into his ear, “I want to know yours.”

Kitsune shuddered in revulsion, and the flames around them winked out. He would have backed up if it weren’t for the wall behind him, so he pushed her away.

“Spirits, who are you?” he said, wiping at the spit with his sleeve.

“Oh, good, we are going to play!” Still holding her blade, she gave a formal bow. “My name is Mai.”

About The King’s Fear 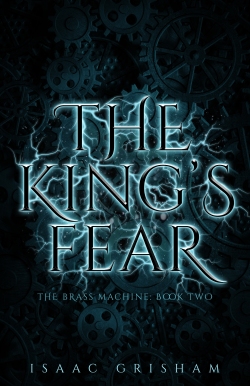 Myobu has waited all his life to find love, and just as he makes a connection, it’s taken from him in an instant. Reeling from the fatal climax of his love story with Prince Kitsune, the magical Yokai must take advantage of his second chance at life, reconciling his past and present while keeping the prince from going down a path of darkness. Together with Kitsune, Myobu is tasked with destroying an evil that threatens the brass machine—and their world.

Meanwhile, Prince Kitsune is lost in the depths of responsibility and the murkiness of grief. His role is at the head of an army, defending against the whims of his deranged father. King Oni’s aggression is mounting, and he will stop at nothing to maintain his power over Kitsunetsuki.

Overcome with the guilt of killing the man he loved, Kitsune finds direction when he discovers the legendary Sword of Inari—but when the voices within the steel speak to him, they lead him deeper down a path of deceit. In a tale of good versus evil, life and death, Kitsune and Myobu must come together alongside their allies to face unspeakable horrors.

Isaac Grisham currently lives in a blue county of Illinois with his partner and doggos. By day, he works at a local college. The King’s Fear is his second completed novel and, by night, he is busy assembling the gears of the third and final piece of The Brass Machine.