Release Blitz: Always With Me by Kris Jacen

Always With Me by Kris Jacen 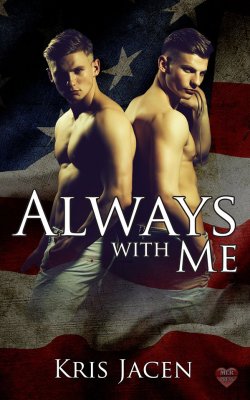 Calvin and Camden Luna — why yes, their dad is a big baseball fan— have moved around the world with their parents. Their father has been in the military since before they were born. Proud of their father and all he has done, neither of them is sure the military is for them. Haven’t they given up enough already? Cam is a fantastic baseball player and Cal loves the science of everything.

Tristan Nolan and Maddy Holt both grew up as military kids too, but neither of them moved around as much as the twins. Tris has always wanted to follow in the footsteps of those before him and make a career in the military; Maddy wants to save the planet and capture the heart of Calvin Luna… if he’d only open his eyes. Can Tris be himself — out and proud — and serve and protect his country? Can he end up with the one he’s loved for as long as he can remember?

What can happen when you grow up a military brat with the close ties from your fathers’ close friends and their families? Find the love of your life almost from the start? Or find out that maybe you’re all too close to have anything else.

Kris Jacen grew up just north of Boston, Massachusetts, met her soldier in high school but didn’t marry him until almost ten years later. She moved around with him and their daughters (born in two different states thanks to the Army) for the first 19 years of their marriage (they celebrated their silver anniversary in 2018) before settling in western New York.

She has been the Editor in Chief and Formatting Director for ManLoveRomance Press and its imprints since January of 2008 and has never looked back. Working with the amazing authors at MLR has allowed her to both hone her editorial skills and indulge her inner fangirl. She also acts as editor, mentor and sounding-board for newcomers which lets her “pay-it-forward” and help authors realize their dreams.

You can find out more about Kris on her website www.krisjacen.com.

Categories: Book Promo, LGBT, Published in 2019 | Tags: Always With Me, Kris Jacen, Series - With Me, The Blogger Girls | Leave a comment