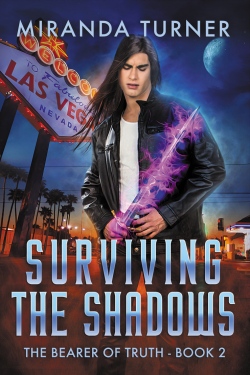 Blurb: Gabriel has been gone longer than predicted, and Evander is growing increasingly worried each day that passes without his return. Confounded by their leaders’ lack of answers, Evander and the team begin to fear the worst.

In the midst of fruitlessly searching Miami for clues to the Daemon Abaddon’s whereabouts, Evander begins to have disturbingly vivid dreams. With a little help from a newly returned and empty-handed Michael and Barabbas, Evander discovers Gabriel has been calling out for help across their nascent bond, and they set off to rescue Gabriel from the depths of the Underworld.

Gabriel is old friends with torture, and his captors haven’t been gentle. Despite growing weaker every day, Gabriel resolves to survive long enough for rescue, or to die fighting, until a Dark Seer begins to dredge up the terror of Gabriel’s horrific childhood, threatening to destroy his mind and soul. Nearing the end, Gabriel manages a last-ditch effort to contact help, reaching out to Evander in his dreams.

Against all odds, Evander and the team fight through the Underworld to reach Gabriel and come face to face with mortality. Sacrifices made for the bonds of brotherhood nearly break them, and Gabriel learns the hard way that embracing the darkness while fighting for the light may be the only way to survive.

From the underbelly of Reno to the glitz and glam of Vegas, Gabriel, Evander, and the men they call family will be tested, and the final confrontation with Gabriel’s maker may be the end of everything they hold dear.

Surviving the Shadows is an approximately 100,000-word LGBTQ urban fantasy with a romantic subplot. It is a direct sequel to Shadowing the Light and reading the first book in the series is essential to enjoying this one. Please see the disclaimer on the Copyright Page for content advisories.

When I finished the first book, Shadowing the Light, I remember not liking Evander at all. He was arrogant and wouldn’t consider a bond with Gabriel at all and just made things a thousand times worse. In this one, I LOVED Evander to the point that, Gabriel was the one who aggravated me. I loved how much Evander was trying. I loved that he was actually making an effort and really, really trying to show not just Gabriel but the guys as well that he wanted to change. It was interesting to see that change in him especially with how adamant he was of never mating a daemon in the previous book. As for Gabriel, I liked that he seems to find strays everywhere he goes and it’s interesting how he’s able to garner so much loyalty so quickly. I loved that camaraderie between him, Evander and the other guys. Plus, there’s Nico! He just fit right in with the guys. I enjoyed seeing Nico train Deslin and Gabriel on their magic and how they’ve both progressed with that. Gabriel still has his issues with magic but he’s working passed that and that’s really endearing.

I enjoyed this sequel but I will say, it’s not as suspenseful as the first book. In this one, it’s more of an emotional progression and character development. Although, Gabriel and Evander still seem to progress backwards than anywhere near a real bond and that aggravates me a little. Evander can’t show Gabriel he’s changed if Gabriel won’t give him a chance. It really pissed me off that Gabriel would hug and comfort everyone except Evander but then claim to Evander he couldn’t touch because he’s still traumatized. I’m sorry, if you’re traumatized, you don’t go and hug everyone BUT your mate especially right after the big trauma when you’re sleeping with two guys cuddling you. Although, towards the end, Gabriel finally gives that leeway but I wanted this to happen sooner and not the last 15% of the book. Add to that, I wish Gabriel would stop sacrificing himself and I do agree that he’s being selfish because he doesn’t want to go through losing someone so why not lose himself? Instead, he’s forcing his family to go through that trauma and not caring how that affects them. Plus, I really wished we had gotten more action. There’s a lot of ‘planning’ but then when the action happened, we got more of it told than shown. Except in the end where it was epic and I did like that we got BOTH Evander and Gabriel’s version.

All in all, I really enjoyed this one. I like that Gabriel has formed such bonds with the guys and seems to always find those lost souls he can save. I enjoyed seeing Evander and Gabriel together, even if they do seem to struggle with cementing their bond. I wished this one had as much action as the first book but I really loved the ending and can’t wait to see where Gabriel, Evander and the guys go from here. They still have so much more to learn and I wonder if once Gabriel and Evander truly bond, Gabriel’s powers will double or not. Definitely looking forward to finding out!