Blurb: Gabriel has been gone longer than predicted, and Evander is growing increasingly worried each day that passes without his return. Confounded by their leaders’ lack of answers, Evander and the team begin to fear the worst.

In the midst of fruitlessly searching Miami for clues to the Daemon Abaddon’s whereabouts, Evander begins to have disturbingly vivid dreams. With a little help from a newly returned and empty-handed Michael and Barabbas, Evander discovers Gabriel has been calling out for help across their nascent bond, and they set off to rescue Gabriel from the depths of the Underworld.

Gabriel is old friends with torture, and his captors haven’t been gentle. Despite growing weaker every day, Gabriel resolves to survive long enough for rescue, or to die fighting, until a Dark Seer begins to dredge up the terror of Gabriel’s horrific childhood, threatening to destroy his mind and soul. Nearing the end, Gabriel manages a last-ditch effort to contact help, reaching out to Evander in his dreams.

Against all odds, Evander and the team fight through the Underworld to reach Gabriel and come face to face with mortality. Sacrifices made for the bonds of brotherhood nearly break them, and Gabriel learns the hard way that embracing the darkness while fighting for the light may be the only way to survive.

From the underbelly of Reno to the glitz and glam of Vegas, Gabriel, Evander, and the men they call family will be tested, and the final confrontation with Gabriel’s maker may be the end of everything they hold dear.

Surviving the Shadows is an approximately 100,000-word LGBTQ urban fantasy with a romantic subplot. It is a direct sequel to Shadowing the Light and reading the first book in the series is essential to enjoying this one. Please see the disclaimer on the Copyright Page for content advisories.
END_OF_DOCUMENT_TOKEN_TO_BE_REPLACED

Exclusive Excerpt from Surviving the Shadows

There were spriggans dragging broken limbs behind them as they continued to shuffle toward Gabriel and the rest of the team, fighting with arms hanging on to their bodies by the smallest piece of flesh, and dragging just their torsos across the ground without care to the damage they were doing to themselves to reach their goal.

Gabriel wasn’t sure they could win this battle. The team’s lack of training against Daemons and other supernatural beings was coming back to bite them in the ass. It was a problem they would need to rectify, and soon, but right now, they had to make it out of this mess.

“You guys get out of here. We’ve got this.” Evander waved Gabriel, Nico, and Rafe off. They did need to get to Vasim, and maybe by taking him out, they could take down this possessed army too. Gabriel hoped they could last long enough for them to do it.

“Rafe,” Gabriel whispered. “Flash to the front door and take those bastards out as they’re coming out. Take out as many as you can.”

“On it, Baby Boss,” Rafe replied before flashing away.

“What the fuck? Baby Boss?”

Posted on January 2, 2019 by thebloggergirls

Genesis of My Story

Thank you for allowing me to stop by today and share a little something about how my book came to be. My debut novel is in the urban fantasy genre, and as I enjoy sweeping story arcs, it is the first in a planned five book series following the same two main characters. There is a romantic subplot, but romance is not the main focus. Gabriel and Evander have a lot to work through before they’re ready for a HEA.

One day about five years ago, I was sitting around when a few sentences popped into my head that I felt compelled to write down. That one line later became the jumping off point for what is now a series following the same two main characters and their team of immortal warriors who will have their own spinoff series. But back then, I only had a line.

“Gabriel woke to an angel beside his bed. Unfortunately, it wasn’t his dream man. It never was.”

Fast forward three years and I was going through some huge life changes when Gabriel popped into my head with his smart mouth and swagger. The line above originally had no names and even different pronouns. I’d never done anything with it. A story for it had never come to me like it had with some of my other small pieces of writing. But, as I do when a character or other idea pops into my head, I opened my work in progress folder and my ideas document. That line was at the top, and Gabriel grabbed on to it and told me it was his.

I immediately began writing and hit about the 15K mark before those huge life changes started affecting me too deeply to continue. I put it aside with all my other partially finished stories and concentrated on better establishing my editing business to be able to support myself and my children. A few months later, I moved myself and my children across the country to be closer to my family and live in the area I grew up in.

The first year we were here was mostly spent adjusting to our new normal, but the kids settled in quickly, and we were soon happily living our lives. This new, calmer existence allowed Gabriel to come back to the forefront of my mind, and he was shouting…loudly. Reading back through what I’d already written, I realized that, through all my editing work, I’d improved my own writing too. So I started over, only keeping the original starting line and finessing it a little.

From a single line and a single character, an entire world sprang into existence in my head. A world filled with angels, demons, immortal warriors, secret missions, gods and goddesses, and more. This world also has limits, and most people aren’t what they seem. There is prejudice, unfounded hatred, and all the human fallibilities packaged in the bodies of immortal and/or supernatural beings. While they have power, they don’t have perfection, and in my very biased opinion, that’s what makes them so interesting. I couldn’t stop writing their story, and for the first time in my life, I reached those all-important words. The End.

END_OF_DOCUMENT_TOKEN_TO_BE_REPLACED 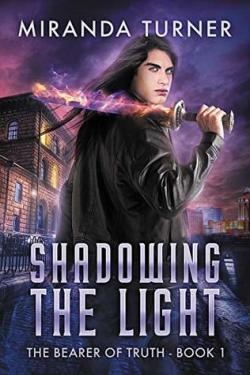 Blurb: “Everybody has their own agenda. Everybody.”

Hunted for the unique blood that runs through his veins, half-angel, half-demon Gabriel Sinclair lives without expectations. On the run from forces on both sides of an ancient conflict, he searches for strength and peace in a world which only seeks to use him.

When Gabriel is forced to stop running, assigned a team—and a mate—he doesn’t want, and reluctantly tasked with a mission, he must overcome obstacles both real and imagined. Otherwise, the world as he knows it, and the mate he’s reluctantly come to care for, may cease to exist.

“I will do as the Creator bids me. Always.”

Evander Ryan is special, and he knows it. The final handcrafted immortal warrior for the light, he is the Creator’s greatest masterpiece. For fifty-eight years, he’s lived his life in black and white, coddled by his Maker, while leading his team to countless victories against their enemies. Those fights were easy. Working with a new, uncooperative mate who sees the world in shades of gray? Less so.

As Evander’s eyes are opened to the existence of light warriors who are not good, dark warriors who are, and the wider world of supernatural beings, he learns nothing is as he thought it was, and his mate isn’t who he thought he was either. Maybe there’s something to be said for not always following the rules. . .
END_OF_DOCUMENT_TOKEN_TO_BE_REPLACED