Posted on July 6, 2019 by thebloggergirls

“Almost there,” the cab driver said, breaking Carlos’s train of thought. Carlos looked at the meter. It was high, but thankfully not as high as he’d thought it would be. With his funds now limited, he was counting every penny until he found his next job.

The gate to the ranch was open, and the same sign still hung at the entrance: Arroyo Angeles. The long road to the front of house felt farther than Carlos remembered, however he just chalked that up to his anxiety. The old two-story house was also the same, though you could tell some improvements had been made here and there. There was a fresh coat of white paint on it, and the roof seemed newer.

Carlos smiled. He was glad that his mother was able to keep it up, even after his father’s passing. Though he always knew she would. The woman was warm when she needed to be, although that didn’t mean she ran her house that way. She was made of steel and was strict about how she wanted things. Outside of their longtime housekeeper Virginia, it was hard for the family to keep any of the inside help because of how tough their mom could be. She was the true essence of sugar and spice.

“Need help with your bags?” The cab driver asked.

Carlos paid him, and as much as it hurt, gave him a nice tip. The man did drive him all this way, so Carlos felt he had to thank him somehow.

Carlos climbed the steps to the main house, unsure of what he was about to face. He realized Beto wouldn’t be the friendliest of greeters, but what about the rest? Who would be behind those doors, waiting to sneer at him the moment he showed his face? The fear was overwhelming, and Carlos almost felt like running after the cab  to return home.

As he was contemplating, a nice, cool breeze started brushing across his skin. It was a welcome relief from the blistering Texas heat that was common for the summer. Yet the odd thing was that up until that point, the air had been very dry and still. Not a cloud in the sky, or anything else that would signal such a breeze would occur. Carlos soaked it in as long as he could. He didn’t know when he would have another chance to feel this cool and calm. The small moment allowed him to relax, and he was able to gather the courage he needed to make his way up the steps and to the door.

Carlos picked up his bag and walked up, then lifted his hand to knock on the door. The doorbell was an option, but Carlos wasn’t quite ready to make his presence known just yet.  He had no control over how loud the bell would be, but he could knock as softly as he wanted. Before his hand could reach the large door with typical ranch décor, it opened.

Carlos expected to find Beto’s scowling face at the other end of it, but it wasn’t. Instead, standing in front of him was one of the most handsome, rugged men he had ever seen. Dressed in tight jeans and a plaid shirt that was unbuttoned enough to leave some of his seemingly perfect chest exposed, this man was every inch the kind of cowboy many fantasized about.

He was tall, probably around six feet two inches, broad shouldered, and with tan skin that signaled long hours in the sun. His chiseled jawline carried a smile, which was something Carlos had not expected to receive from anyone in the house.

“Hi there, you must be Carlos. I’m Eugenio. I’m one of the new ranch hands your mom hired.” Eugenio extended a large hand to Carlos, who took a second to realize it was there. He just didn’t expect to find someone so handsome and sexy opening the door for him. Carlos couldn’t recall anyone that desirable working for his parents before.

Carlos winced internally. He couldn’t believe he was acting so weird, and in front of Eugenio no less. The last thing he needed was for some homophobic cowboy to think Carlos found him attractive.t To be fair, if Eugenio did know about Carlos, his demeaner wasn’t expressing anything but kindness.

“You mentioned that. I guess living up in Austin made you soft to the South Texas heat. No problem, your body will adapt again. Let’s get you out of the sun before you pass out or something worse.”

Eugenio reached for Carlos’s bag and motioned for him to walk ahead of him. Such a gentleman, Carlos thought. I could get used to this. Though it probably won’t happen again.

“Your brother is in the office. Do you remember where that is?”

Eugenio’s smile faded. “I’m really sorry about your loss. Your mom was a good woman. Tough but good. She always treated me with respect. Beto is taking this pretty hard. There are some things going on that he doesn’t want to share. I think it would be best if he explained it to you. I’ll take your bag up to your room. That way you can unpack and rest a bit before we eat.”

Carlos couldn’t help but smile at how nice Eugenio was being. “Thank you so much. It’s okay though, you don’t have to.”

“Carlitos, is that you?” A voice shouted from another room. It was Virginia, the housekeeper. Footsteps could be heard running from upstairs to where they were.

“No worries, that’s what I’m here for. And it’s my pleasure too.” He stuck his hand out again, and Carlos immediately reached out to shake it. There was something about this handshake that felt different than the first one. It lingered a bit more, as if neither of them wanted to let go. Carlos could feel a certain spark emit from Eugenio’s hand and straight to his. He figured it couldn’t be what he thought. Though now the seeds of curiosity were firmly placed. 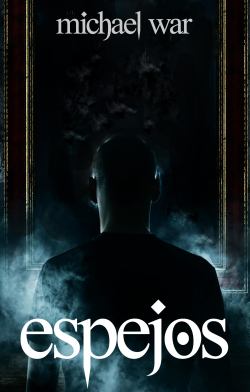 After his mom passes away from a terrible accident, Carlos heads home to Tres Reynas for the funeral—and to reunite with his brother. Given he left after his parents abandoned him for coming out, it’s not a homecoming he’s looking forward to.

Once home, he learns a neighbor wants to steal his family’s ranch, and his brother is considering selling it. Determined not to let the ranch be lost, Carlos works to save it—with unexpected help fom the handsome, rugged Eugenio.

But Carlos can’t seem to focus, especially with his mother’s image seeming to haunt the ranch mirrors, like she’s trying to tell him something—or maybe like he’s just losing his mind.

Michael War is a writer whose real life tends to be on the boring side, which is why his imagination seems to float towards gay romance. Aside from writing about beautiful gay men of all types (bears, jocks, twinks) getting it on, he also enjoys writing poetry and screenplays. War holds an MFA in Creative Writing and plans to write more romance themed books in the near future. Follow him on Twitter and Facebook  for updates on upcoming stories or with any questions or comments. Or, you can read his blog for some mindless ramblings.

As part of this blog tour, Michael is giving away a $10 Amazon Gift Card AND an ebook copy of Under Five!! To enter, just click the link below!