Posted on September 10, 2019 by thebloggergirls

First of all, thank you so much for having me! I’m thrilled to be here with my new urban fantasy Dead Man Stalking. This is the first book in the Blood and Bone series and I am thrilled to put it out there into the world. I was meant to be writing an entirely different book, but then Took and Madoc took up residence in my head and I had to give in and let them have their say.

I had a blast creating this world and these characters, and I hope you enjoy them too. I’ve included a chapter of a prequel short story that you can follow through the blog tour.

For a second Luke felt the lust catch between then, sharp and electric, and he was surprised to find himself torn between the urge to lean in and the need to pull away. It wasn’t the sort of decision it should be hard to make.

Then Madoc let the tie slip from his fingers as he stepped back. His expression flicked to thoughtful so sharply that Luke, his throat tight and his nose full of the musk and salt scent of Madoc, wondered if he’d just imagined the tension. He tugged the tie loose so he could swallow as Madoc picked up the file to flick through the dog-eared papers. “You put this together on the plane? And pulled these other files?”

Not exactly. Luke cleared his throat and, without the temptation right in his space, had the good sense to put some space between him and Madoc. Not enough to look like he was in flight, but enough he didn’t taste the vampire when he breathed.

Anakim, the mental correction kicked in from habit. Luke silently cursed it as he picked up his gun and shrugged the shoulder holster on. The weight of the weapon nudged awkwardly against his ribs as he adjusted it. A glance toward the mirror showed it black and deadly against his light blue shirt.. He picked his jacket up from where he’d hung it to air and pulled it on.

If he wanted to fuck a vampire — he deployed the term mentally with sharp annoyance at himself — then he could scratch that itch. It would probably be a bad idea and the schism with his family would, finally, be set in stone, but what was new there?

Madoc was hot as hell and, yeah, Luke wanted to crawl under him to see if it would be as good as his imagination thought it would. He wanted to be a BITER too, to prove he’d made all the right choices even when they were hard. End of the day, he could get fucked anywhere but the BITERs were the only game in town.

It really should have made it an easy choice.

“And you didn’t warn anyone?” Madoc asked curiously. “Tell them that someone else was going to die?”

“Someone else is always going to die,” Luke pointed out. “That’s not much of a warning without a victim, a time, and a motive. I needed more cases.”

“Yes,” Luke admitted. He felt a twinge of guilt for a second as his conscience caught up with his brain. It wasn’t that he forgot his puzzles were people, just that sometimes it seemed less important than the chase. “Unfortunately. They were going to die anyhow, though, and this way it will be useful.”

Madoc looked exasperated, or amused, for a second.

“Make that argument to Kit sometime,” he said. “OK. Kit will stay on the Hunter angle, that makes sense. You find me a compulsion killer, if he’s real.”

The dead boy on the stainless steel slab in the local morgue had a name, a major, and a shell-shocked roommate who’d identified him. Parents too, somewhere in Savannah. The police had gotten in touch with them, but they still thought it was a mistake. One that they’d uncover when they flew in and, with a mixture of pity and relief, explained it was someone else’s son.

19 years old. It hadn’t taken long for Luke to put together a Cliff Notes biography for him. Jamie hadn’t really had the time for anything else. So far a bad grade in Computer Science 101 that had almost left him on academic suspension was the worst thing that Luke had turned up.

Whatever had made the killer decide that Jamie was the perfect slaughter stand-in, it probably wasn’t that.

“Most people,” the coroner—Pear he’d introduced himself as, with no explanation for whether it was first or second name—remarked as he fished in the wet cavity of Jamie’s opened stomach, “Get squeamish around this bit.”

Luke shrugged. “I’ve a strong stomach,” he said. “And I’ve seen dead bodies before. Anything I don’t want to wait on the autopsy report for?”

Pear shrugged and pulled his gloved hand out empty. He wiped it on a bleached-thin, still stained towel.

“He was dead when they started cutting. So that’s some mercy” Pear said. He grabbed the corpse by one pallid shoulder and lifted it up off the slab to point at a black mark on the freckled back. Low and to the right. Pear poked the spot with a finger. “Looks like he was shot in the back, small calibre. It would have probably punctured his lungs. Death wouldn’t have been immediate, but relatively quick.”

Pear let the body drop back down onto the table with a meaty slap. “It’s empty. Liver and lights, all gone. Only thing left was the intestines. And between the bugs and the sun, they aren’t in a state to tell us much. Once the tox screen gets back, maybe I’ll have something definite to tell you. Until then? Probably is what you get..”

Now that was where Pear was wrong. He might not have realised it, but he’d given Luke something useful.

“Let me know if there’s anything else,” he said as he turned to leave.

He got halfway to the door when Pear called after him. “There’s one thing.”

Luke turned around. The soles of his boots squeaked on the tiled, scrubbed floor.

Pear pulled the video camera down on its flexible neck to focus on Jamie’s hands. The white, loose-skinned digits appeared on the long monitor hung from the ceiling on two brackets. He had bitten fingernails, chewed down to the quick, and faint purple stains around his knuckles.

“He fought his attacker?” Luke asked.

“I doubt it,” Pear said. He swung the camera up to point it at Jamie’s face. There was a split in his lip and more bruises stained over his mouth. “This bruises had time to develop before he was killed. An hour or two, at least. It might have been whoever who killed him—it might have been why they killed him—but it happened before he died.”

Tomorrow’s installment on Love Bytes! All the blog tour posts will also be linked here: http://tamoorewrites.com/deadmanstalking/ 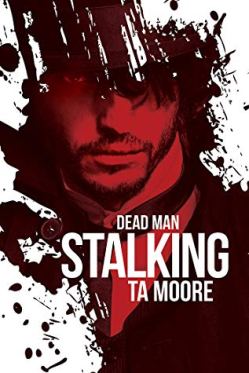 Agent Luke Bennett proved that humans could rise just as high in the ranks as their vampire colleagues—until a kidnapper held him captive for a year and turned him without his consent.

Now he’s Took: a reluctant monster afraid to bite anyone, broke, and about to be discharged from his elite BITERs unit.

When an old colleague suggests he consult on a BITERs case, Took has little to lose. The case is open and shut… but nothing is ever that easy. As he digs deeper, he discovers a lot more than one cold case is at stake, and if he wants to solve this one, he’ll need the help of the BITERs team. Even if that brings his old commander, Madoc, back into his life.

TA Moore is a Northern Irish writer of romantic suspense, urban fantasy, and contemporary romance novels. A childhood in a rural, seaside town fostered in her a suspicious nature, a love of mystery, and a streak of black humour a mile wide. As her grandmother always said, ‘she’d laugh at a bad thing that one’, mind you, that was the pot calling the kettle black. TA Moore studied History, Irish mythology, English at University, mostly because she has always loved a good story. She has worked as a journalist, a finance manager, and in the arts sectors before she finally gave in to a lifelong desire to write.

Coffee, Doc Marten boots, and good friends are the essential things in life. Spiders, mayo, and heels are to be avoided.

As part of this blog tour, one lucky winner will win a Gift Card for $10 Dreamspinner Gift Card!! To enter, just click the link below!

Don’t forget to check out Nikyta’s review of Dead Man Stalking to see what she thought of it!