Yours, Forever After by Beth Bolden: Exclusive Excerpt & Giveaway!

Posted on September 20, 2019 by thebloggergirls

Exclusive Excerpt from Yours, Forever After

Rory flopped down onto the ground, into much the same position he’d occupied the night before. “I really can’t believe that worked,” he said, grinning. “But as soon as I saw their rings, I knew who they were, and I knew they could be reasoned with.”

“Reasoned with? Asking you to swear an oath on a sword that could bring you a fiery death?” Gray muttered.

Except that he hadn’t, and they both knew it.

“I could have done it,” Gray said lowly. “You don’t need my help. What you know is so much more valuable. I lived over this direction when I was a young child, and I’d never heard of that tribe before today.”

Rory gaped at him. “Are you really claiming to be expendable? You?”

At Gray’s refusal to answer, Rory stood up and started pacing back and forth in front of the log he’d slept against the night before. Had it only been the night before? It felt like an eternity had already passed since they’d escaped the valley, but it had been barely forty-eight hours.

“You built a farm from nothing. You’re a fighter. You were going to fight those men off; I saw the way you held the sword. You know how to use it much better than I.” Rory paused. “A pretty princeling. Useless. I believe that was your impression before today.”

“You’re a prince,” Gray said, because he couldn’t quite wrap his thoughts around everything that had changed, so suddenly and so irrevocably. It was easy to condense down all his jumbled feelings into one single fact: Rory was a prince, and he was going to reclaim his throne.

Rory stared incredulously at him. “You don’t think that matters.”

It hadn’t, but somehow, now it did.

Flushing, Gray turned away. “You barely slept before. You should get more sleep now.”

“Stop changing the subject. Were you really going to swear my promise on my sword?” Rory demanded.

Rory’s intelligence had already come in very handy, but now Gray wished he was a little less perceptive. Squaring his shoulders, Gray glanced over at Rory. “It was logical.”

“No,” Rory said with an unbearably attractive decisiveness, “it was all emotional.” Closing the three steps between them, Rory reached out and put a hand on Gray’s chest, right above where his heart beat faster than he’d ever admit. “Try to tell me it wasn’t emotional. I can feel it. Right here.”

Gray could feel it too; his heart, which had been numb and alone for so long, was waking up, the numbness receding. It felt like too much, too soon, but before he could stop Rory and say, that’s plenty close enough, Rory rose up and pressed his lips to Gray’s.

About Yours, Forever After 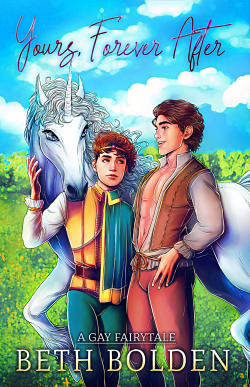 Fifteen years ago, Prince Graham of Ardglass barely escaped from the ancestral castle with his young life. Rescued by a magical creature and spirited off to a faraway valley, he grew into a strong, capable man—never shirking his duties on the farm, but forever bitter over his father’s betrayal. But just when he has finally come to terms with being lost and staying lost, a visitor arrives in his valley and changes everything.

But a fight is something Rory is unprepared and untrained for, until he’s saved by a handsome, unassuming farmhand and his snooty, smug, and surprisingly talkative unicorn.

A lifelong Oregonian, Beth Bolden has just recently moved to North Carolina with her supportive husband and their sweet kitten, Earl Grey. Beth still believes in Keeping Portland Weird, and intends to start a chapter of Keeping Durham Weird.

Beth has been writing practically since she learned the alphabet. Unfortunately, her first foray into novel writing, titled Big Bear with Sparkly Earrings, wasn’t a bestseller, but hope springs eternal. She’s published thirteen novels and five short stories. Yours, Forever After is her first fantasy/fairytale re-telling.

As part of this blog tour, Beth is giving away a $25 Amazon Gift Card!!! To enter, just click the link below!