Posted on October 20, 2019 by thebloggergirls

I loved parties. Even more, I loved parties that were all about me. Gilt, the elite film club in LA, met at the Chateau Bissou every month, but this was a special occasion for my Oscar nomination.

I’d already been riding high from all the articles and interviews done about me, but nothing, abso-fucking-lutely nothing, compared to hearing Janice Jane read my name off that card.

“Performance by an actor in a leading role…oh, I’m so excited! It’s Truman James! Bitter Nightshade!”

Most of the event was a blur after that. I’d hugged dozens of people and read the speech written for me without fumbling. Now, I sat enjoying a cigar and a glass of 1939 Macallan with the biggest producer in the world, Gene Montray, while watching hot men and women of various ages flit around half-naked, taking orders and invitations.

I had my eye on a cute little brown-haired twink with a birthmark high up on his thigh. He wore no shirt and his skin glowed under the amber lights as he passed by, giving me a sultry smile. He smiled again before disappearing down the rear hallway.

“Truman, go after him before you snap your neck from looking.”

I turned to Gene with a laugh and a wink. “You don’t have to tell me twice.”

I made my way down the hall. A hand shot out to grab my lapel and I grinned. Twinky pulled me into a walk-in pantry, and I watched as he tried to seduce me with a slow lick of his full lips. “Congratulations, Mr. James. I loved your movie.”

Smirking, I said, “I doubt it.” The truth was, I barely even remembered the fucking thing. It was shot over ayear ago, and there had been so many reshoots and edits.… “You want to suck my dick or what?”

“Yeah, it doesn’t matter. You suck at sucking.”

I was too busy zipping up my now-flagging erection to notice his anger. This was becoming an all too familiar problem I didn’t want to think about.

I opened the pantry door and made my way to the employees-only bathroom.

“This is ridiculous, Adam. You’re twenty-seven, for God’s sake!”

I stopped at the harsh voice coming from around the corner.

“I’m sorry.” The shy voice was high for a man, but it had a lyrical quality that caught my attention.

“Sorry? It’s just a party. You go out and you talk about movies. Stop hiding in the lounge like a kid and act like a fucking adult!”

I kept going and saw them. One was muscular and vaguely familiar. The other, slender but fit, with gorgeous skin that would be buttery-smooth under my hands. I swallowed the saliva gathering in my mouth. My erection sprang back with a vengeance and pointed at him like a compass due north.

The muscular one glanced over and did a double take. “Mr. James!”

“You’re in my way.” I pointed to the bathroom beyond the pair.

They shuffled over, and I nodded. With one last glare at the pretty man, the muscular one left.

Pretty looked everywhere but at me and ducked his head, trying to squeeze past me in the narrow space. He was shorter than me by about four inches, I guessed, if he stood straight.

He froze and turned halfway.

Jolting, his gaze shot up, more in surprise at the order than obedience.

“Just wondering what color your eyes were. Are you into guys?”

His cheeks flushed red, and he stepped away as I stepped forward with my second-best smile. That was a definite yes. “Meet me in the bathroom.”

Those big eyes widened and followed me as I continued down the hall.

Am I into guys? Meet him in the bathroom?

I was a little out of touch with the real world, and I hadn’t been on a date in years, but even I was aware of what he wanted. And he was being rude about it. The jerk. I ran in the opposite direction. Literally. I ran so fast, the guests in the purple room were a blur.

I knew who he was, of course. My stepbrother, Chad, had made it my job to know. Dragging me to all the parties he could get into had become Chad’s crusade to “change me for the better” as he put it. I’d hadto study, with him flashing me photos on his phone, the “Who’s Who” in LA.

I slowed my steps, admiring the beauty of the hotel with its Old Hollywood charm, and disappeared into a small room with a lovely desk, though the books on the shelves were purely decorative. Collapsing on a settee, I ran my hands through my gelled hair, messing up all the work Chad’s girlfriend had done.

Truman James. He’d started his acting career—a little late by Hollywood standards at the age of twenty-seven—with a bang and had hit after hit for years. He’d started as a model, I recalled, and he was perfect for it with his sculpted bone structure, thick dark hair, and dark blue eyes. I’d never cared for his movies. Bitter Nightshade had been okay, but the book was sooo much better. They’d left out the most important scene between Mercury and Alana! And he definitely hadn’t been the best actor to play Mercury. Chris Brazon would’ve been much more appropriate. My buddy Jeff and I had chatted about it one night while gaming, and he agreed with me. Renee Jones had been good as Alana, though. She’d captured her fierce innocence perfectly.

Chad had gotten me into one of the most coveted parties in the world, calling in favors left and right, and here I was, hiding. He didn’t understand that I didn’t care. I wanted to be at home, writing.

I hadn’t told Chad how well my books had started to sell. Heck, Chad didn’t even know I wrote books. He knew I liked books, but not the self-publishing. He’d look down on it like he did with my love of playing the keyboard, and how I’d lived and breathed Dragon Ball Z with my friends when we were young.

I’d stopped caring a long time ago what my stepbrother thought of me, but living in his guest room for the past few months while my apartment was fixed for a mold problem had brought all that old shit to the surface. He hadn’t asked me for rent, though I’d offered. So, now he wanted to “fix” me and expected me to cooperate because I was living there for free. It was a ridiculous turn of events, and I didn’t know how to stop the cycle.

My thoughts circled around to Truman James. It was beginning to sink in, what he’d asked me. He wanted to fool around at a party with me. I did like guys, and he was gorgeous with his defiant good looks and famous slashing grin, but I wouldn’t know what to do or what to say to him. I had trouble talking to my own friends and family, let alone strangers and movie stars.

My chest hollowed out, and a cold sensation spread through my limbs all the way down to my fingertips. Thinking about going out there and talking to people made my stomach cramp and sweat break out on my palms.

I wiped them on my thighs and kept rubbing. I closed my eyes and took deep breaths as the anxiety slowly crept upon me. I was used to it. It wasn’t an attack, yet.

I kept tellingmyself that until I’d calmed.

I want to go home. 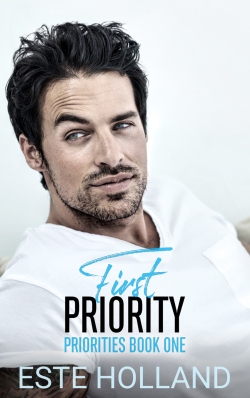 Meeting an A-list movie star like Truman James wasn’t part of my life plan, but neither was temporarily living with my bully of a stepbrother. Being hit on by said celebrity definitely hadn’t been planned.

I wasn’t up for wild parties or talking in front of cameras, so why did I find myself answering Truman’s phone calls and texts? Even more confusing, why did I go on a date with the man?

Beating my social anxiety wasn’t going to happen anytime soon, and avoiding the stubborn actor was even harder, so when I was thrust into the spotlight, there was only one thing I could do…

From the moment I set eyes on Adam Hendrix at my Oscar party, I was enraptured. His sweet demeanor and pretty-boy looks captured my heart from the start, and I refused to let Adam get away.

I never intended to out Adam to the media, but that’s exactly what I did. So, when the paparazzi began to swarm, I did the only thing I could to protect Adam… I whisked him away to a place no one could get to him.

Safe on the little island I loved, I let my guard down and showed Adam the real me. The one only a few people in the world know.

This is a m/m contemporary romance; alpha/nerd; low angst novel. Trigger warning for some bullying.

Este Holland is a writer and reader of all things Romance. She’s also a treasure hunter, a word wizard, a lover, and a fighter. She was born and raised in WV, and now lives in Virginia. She works in marketing during the day. She began writing novels in 2012.

As part of this blog tour, Este is giving away a $20 Amazon Gift Card & Ebook of First Priority!! To enter, just click the link below!