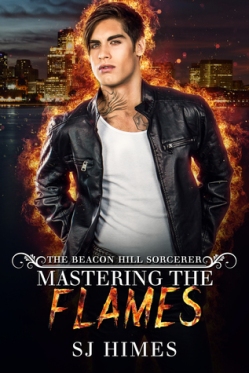 Blurb: The fourth book in the hit urban fantasy series shifts focus to the remaining Salvatore brother in this slow burn romance…

*
Guilt-ridden after the massacre of his family, Isaac Salvatore turned to binge drinking to escape the pain. Now twenty-four years old, Isaac is a recovering alcoholic woefully out of practice in the magical arts, leaving his fire affinity hanging on the edge of disaster. After a month of rehab, he returns to Beacon Hill and his family, determined to remain sober, learn to control his magic, and figure out a plan for his life that doesn’t involve drinking.

Constantine Batiste is the oldest, most powerful vampire in the city. Born in ancient Gaul, the bastard son of a Celtic king, his long life has been shrouded in tragedy and horrors. Recent mistakes have left him wary and determined to guard his clan from all foes. When two of his clan members fall victim to an ancient evil, he summons the Necromancer of Boston for aid. Accompanying his older brother to the Tower is the handsome young fire mage once wounded by Constantine’s arrogance, and their encounter reignites an attraction that burns within both Constantine and Isaac.

The answer to who is targeting the vampires of Boston is buried in the dark, early days of Constantine’s transition to an immortal life. Isaac finds himself saddled with a painful insight into the evil cutting a swath through the supernatural population of Boston. While his brother, Angel, takes over the hunt to find and stop the threat to the city, Isaac struggles to find a balance between helping his brother and finding his own purpose and place in the world, free from his brother’s shadow.

Falling in love wasn’t part of his plan, but mastering the flames that burn between him and Constantine soon becomes the most important thing in his life, even as an ancient evil seeks to destroy them.

Mastering the Flames is the fourth book in The Beacon Hill Sorcerer series and is not a standalone. The series should be read in order for maximum enjoyment and understanding of the plot and characters. The Content Advisory is on the Copyright Page and can be seen by downloading a sample or using the Look Inside feature. 130k words.

Holy shit, this book had me all over the place! First, I just want to say, you can’t go into this one expecting another book like Angel’s. For one, this isn’t Angel, this is Isaac and the brothers are VERY different. Isaac has issues and he’s trying to work through these issues. He’s a recovering alcoholic and he struggles every day with it. In fact, his life is a bit of a mess but he’s still trying his damnedest to start figuring out who he is. In comes Constantine, the City Master, and who Isaac has been lusting after since they met. I don’t know why, but Constans and Isaac were such a surprise for me, which I absolutely loved. I adored the fact that Isaac was trying so hard to be a different person, to be better and to really embrace his heritage while Constans was so loving and so gentle and patient. I expected Constans to be a little more rough or maybe even pushy but he’s understanding and he knows that Isaac needs to figure things out on his own even if it would be easier to just inform Isaac.

The book focuses a lot on Isaac and Constans relationship and Constans supporting Isaac because that’s what he needs. I loved that we see Isaac on this journey to becoming a better person not just for himself but also to Angel because he knows he’s been super shitty to Angel. I loved that Constans was there every step of the way but I also really liked how the conflict of the story tied into them. I won’t go into detail about it because it was fun to uncover but I will say with this one, we get bit more info into the Massacre and get some questions answered with that. It was really fun seeing it all unfold and I really adored Isaac and Constans as characters but also seeing their relationship develop.

While I absolutely LOVED this book, I had one little niggle. I hated the flashbacks. I didn’t feel like they added much to the story because Constans ended up retelling a bit of what happened to him so while, at first, I thought they would add a lot to the backstory, once he told everyone about his death, I felt like we could have done without them. Granted, they are only in, maybe, the first third of the book so they didn’t last long thankfully. And I did kind of like seeing a young Constantine but they were just a little jarring for me.

All in all, this was such a great addition to the series. I like that Isaac and Angel are so different and we see Isaac struggle through dealing with his addiction. I loved that Constans and him had such a strong bond and seeing them navigate their feelings. I also enjoyed seeing Isaac come into himself and getting some answers to long forgotten questions. I can’t wait to get the next book because it’ll be Daniel’s and Rory’s and I’m eagerly awaiting their story!

Overall Impression: I really loved it!