Posted on October 26, 2019 by thebloggergirls

Niko was flush with success after spending nearly an hour in the air. His dragon provided him with a surge of confidence and strength. They were feelings Niko planned to hold on to even while outside his dragon form. Perhaps his beast could help him learn to restrict the hold his OCD had on his life. As he’d told Costas, he would always have it as part of him, but he was ready to fight for more control. He was no longer a timid boy, and thanks to the Draconises, he had choices. Like his dragon spreading his wings again, Niko was finding that when he dug inside himself, he had more power than he could’ve imagined. It was an intoxicating realization, and Niko was prepared to have more say when combating the voice in his head that demanded appeasement.

The entire royal family was set to leave D’Vaire soon with the weekend winding down but somehow, he found himself sitting in Aleksander’s office with the High King; his younger brother, Duke Argent Worthington; and of course Niko’s best friend, Costas, who he stayed close to whenever possible.

The mood was light until Worth pinned Niko with a penetrating look. He was growing more used to making eye contact at least briefly, but he couldn’t hold it long. For him, he was willing to accept that it was simply his preference and not a weakness. The only exception he’d found was Costas, who inspired him to go beyond the limits he’d long ago accepted. Niko’s gaze hit his lap as Worth finally spoke. “You know, Niko, I was confined for a century by our shit of a father, but I was fortunate to have a regular guest stop by and spend time with me. And as technology advanced, I was granted access to both television and the Internet, but I understand loneliness. If you find you need a more interesting friend than Costas here, I hope you’ll give me a call.”

“I’ll keep that in mind, thank you.” Niko was honored by the request and that so many people were willing to make time for him.

“Hey, I’m interesting,” Costas countered as he bumped his shoulder gently against Niko’s.

“Certainly not as interesting as I, but we do have a thing in common. Our mates are still out there, and we both want them. We aren’t crazy like my brother over here who doesn’t even want his.”

“I didn’t say I didn’t want one. I just said not right now,” Aleksander interjected.

“Fate didn’t give me my other half yet, but at least I got a great new best friend and family member,” Costas remarked.

Warmth seeped into Niko at his words, and he wondered how he’d managed without someone like Costas in his life. The past nearly two months had changed him profoundly. It was Costas’s kindness and understanding that steadied Niko as he pushed back against all that had constrained him since he was young. He was finding his own strength, and it was nice to have someone cheering him on.

The desire to take advantage of this opportunity to start fresh had been inside him from the moment he joined the Council, but in Niko’s mind it wouldn’t be as successful in such a short amount of time without having someone believe in him the way Costas did. His ability to do no more than listen allowed Niko to admit that he wasn’t always the problem in his past relationships. It wasn’t his fault he hadn’t connected more strongly to those that had surrounded him; they simply had shared no common ground despite two of them being picked for him by Fate.

An ongoing conversation in his mind was the realization that Fate might not be a malicious goddess but one that was not as perfect as others believed. Niko was growing to believe that perhaps she’d just erred with him. He didn’t know if it was because she’d not taken the time to study him to pick the right pairing, if she had simply not cared for him like all the rest, or if there were limits to her abilities in knowing how two or more people would benefit each other.

“I still say I would be a far more interesting friend to Niko,” Worth stated.

“Perhaps someday I’ll invite you to hang out on the roof deck with Costas and me,” Niko offered.

“Hey, the roof is invitation only,” Costas refuted.

Niko glanced up at the annoyed duke. “I just gave him one.”

Costas leaned in and his expression might be irritated, but his dark eyes were full of humor. “It requires one from both of us.”

“Costas, stop being a little bitch. You know I’m loads of fun. Inviting me up to your fancy roof deck isn’t going to ruin your life,” Worth teased while Niko enjoyed staring at the handsome face of the Royal Duke.

“Give it up, you aren’t ever going to leave this house anyway,” Aleksander argued.

“You don’t ever leave either,” Worth shot back.

“I have everything I need here.”

Costas’s mouth turned up in a smile Niko would have to define as sexy. He’d never dared think that of another, but the thought was even louder than the ones that demanded he obey rituals. “See how popular you are? You’re sowing discord between the High King and the Duke Argent.”

Niko grinned back at him. “I think it might be sibling rivalry.”

“Why does everyone automatically assume Aleksander and I are related by blood just because we consider each other family?”

Turning to Worth, Niko’s eyebrows pulled together in a scowl. “You can’t be serious. You look more like each other than Chrysander and Damianos, and they are twins.”

“Next question. Why would you think a sensible, logical argument would ever work here at D’Vaire?”

“Because Dra’Kaedan’s the only one here who is crazy…and maybe you,” Aleksander retorted.

“Funny, that’s what he says about you,” Worth shot back. 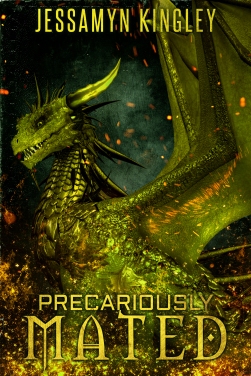 At the tender age of eighteen, Prince Niko Kyrkosdraconis finds himself at a dragon fair, trying his best to maintain his strict schedule of rituals that have followed him since birth, when Fate steps in. The appearance of two strangers alters the course of his life, and Niko sets upon an unforeseen path. Centuries later, Niko is doing whatever he can to pick up the pieces of his shattered world. Unsteady and uncertain, he struggles to place faith in both himself and those around him. Much to his surprise, he finds himself with a new best friend who he grows to trust like no one else before.

Royal Duke Costas Draconis is happy to be back with the men he calls family after ten years of caring for his irascible parents. Having a knack for money, he is once again entrusted with making the dragons prosperous. Costas is surrounded by loved ones and thriving on the outside, but deep inside he yearns for his mate. Then Niko comes into his life. Costas loves the time they spend together, especially their nightly talks on the roof deck, but he must constantly remind himself that the man is not for him.

Niko and Costas go to great lengths to hide their feelings for one another and everyone else, fearful that the future holds nothing but heartache. But things are never what they seem, and Fate will always have the last word, even when you doubt her. As the obstacles before them are slowly peeled back, will Costas and Niko find a way to call each other mate? The road ahead is precarious, and in the end, Fate will have her say, and only then can Niko and Costas prove that the strongest hearts will prevail.

Jessamyn Kingley lives in Nevada where she begs the men in her head to tell her their amazing stories which she dutifully writes it all down in what has become a small mountain of notebooks. She falls in love with each couple and swears whatever book she wrote last is her absolute favorite.

Jessamyn is married and working toward remembering to start the dishwasher without being distracted by the scent of the magical detergent. For personal enjoyment, she aids in cat rescue while slashing and gashing her way through mobs in various MMORPGs. Caffeine is her very best friend and is only cast aside briefly for the sin better known as BBQ potato chips.

She loves to engage with readers there.