Posted on November 8, 2019 by thebloggergirls 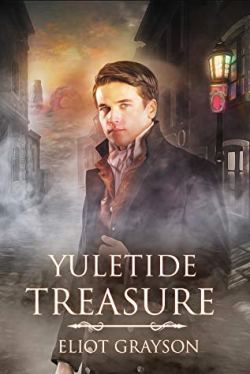 Blurb: There’s not enough Yuletide spirit in the world to fix this holiday disaster…

Eben Sypeman’s world is falling apart. It’s two days before Yule and his business partner is dead, leaving behind empty accounts and looming bankruptcy. And if that isn’t bad enough, his patron goddess is irritated with him. It seems she’s tired of his tendency to mince words and avoid conflict. She’s insisting—quite forcefully—that he start being totally honest with everyone, including himself. Divinely enforced honesty couldn’t have come at a less opportune time, especially when his clerk’s tall, dark and distractingly handsome son enters the picture.

The last thing on Tim Pratchett’s mind is romance. All the former soldier wants is to fill in for his sick father at work and recover from his war wounds in peace. But there’s something about the grumpy Eben that confounds and entices him in equal measure. Their timing couldn’t be worse. They’re complete opposites. And yet…none of that matters when he’s with Eben.

But if Eben and Tim have any hope of finding their very own happily ever after, they’ll have to survive a dickens of a truth curse and the machinations of a trickster goddess—all while searching for enough yuletide treasure to save them all.

This is an M/M romance with explicit scenes, a voyeuristic pagan goddess, and an odious nephew. Despite any other possible similarities to A Christmas Carol, there are neither ghosts nor geese, but readers can expect a happy ending and at least one use of the word “dickens.”

First, I just want to say that this one actually can be read as a standalone story because while it’s set in the same world as the previous two books, there’s no crossover characters and it’s about a different Goddess, Althyone, who gives her blessings very rarely. I was a little confused on what kind of blessing Eben benefited from her but that’s not really what the story is about. It’s about Eben, who just realized his late partner left the business bankrupt, is spiraling because he’s not sure what to do from here and Althyone stepping in so that Eben can’t lie or hold his tongue when asked a question, which was quite funny. It was interesting to see how Eben starts off so frazzled and angry and on the verge of panic attacks but then how he changes throughout the story because of not just Althyone’s help but also Tim’s help. As for Tim, I really loved him as a character because Eben always thought Tim was still a kid with the way his clerk talked about his son. But I loved that Tim, while still recovering from an injury from being a soldier, was still so charming and positive about things. I loved that even though he was put in a difficult situation with knowing the business was going bankrupt and wanting to tell his father, still tried his hardest to help Eben out as much as he could and I loved their journey to uncovering things on Eben’s late partner.

I absolutely loved this one but I wish it had been a little bit longer! I wanted to see what happened after Eben and Tim got to Tim’s house and how things went from there. As it is, we do get this info told in the epilogue, a year later, but I would have liked to see things played out a little especially with seeing Eben tell Tim’s father what happened. Plus, I feel like Tim and Eben could have benefited from getting to know one another a little better.

All in all, this was a really great story. Once I started, I couldn’t put it down and I loved seeing Eben change throughout the story. It was interesting to see how Tim played a big part of that but also in how Tim was so willing to help Eben. I wish it had been a bit longer but I hope it’s not the last we see of these boys because I’d love to see them again!