Posted on November 21, 2019 by thebloggergirls

I’m Jodi Payne and I’m dropping in to tell you about the MCs in my new book, Soft Limits. Soft Limits is a prequel in the timeline of the Deviations Series that can be read at any point along the way, or as a stand alone as well. There are no spoilers for the series.

Bradford is very formal both as a Dom and in his personal life. Eccentric and fastidious, Bradford has high expectations of himself, his subs, and the other Doms at the club. He is so focused on the safety and well being of his members that he is completely caught by surprise when Nikki comes along.

When we meet Nikki, he is homeless and hungry and broke, unable to buy himself more than a cup of coffee. Bradford is instantly drawn to the need in the young man, which he recognizes very quickly is for more than just food. But Nikki is independent, sarcastic, rough around the edges… and Bradford finds his attraction to the young man confusing and frustrating.

Bradford is known for his signature calm and capable demeanor, and Nikki has a way of shaking that foundation like no one he’s ever known before. Nikki is very used to being independent and taking care of himself, but Bradford’s nurturing manner and warm welcome are very hard to resist.

We get to see how these two come to know themselves better through the eyes of the other, and how they both grow and change for the better. 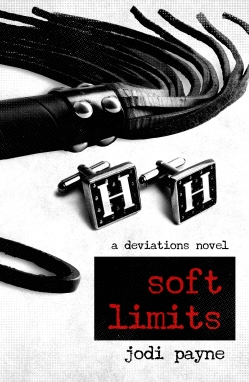 Dominant Bradford’s story is one defined by sudden opportunity, unimaginable heartbreak, and new-found purpose. His calling is to provide a safe and supportive environment for men in the lifestyle. Bringing Doms and subs together is his superpower, yet he feels fated to be alone himself.

In this prequel to the series, you’ll not only discover Bradford’s own history, but also how Bradford is first drawn to Nikki, a beautiful and hungry young man living on the streets, and the unexpected ways Bradford grows and changes while helping Nikki understand a world of strange, new desires.

Deviations readers already know outcome of Bradford and Nikki’s journey together. Soft Limits is a deep-dive into Bradford’s story, into what makes the Dom tick, and how he ended up with ownership of the club. It also introduces Nikki, the sub that tests Bradford’s patience, steals his heart, and soothes his soul.

JODI spent too many years in New York and San Francisco stage managing classical plays, edgy fringe work, and the occasional musical. She, therefore, is overdramatic, takes herself way too seriously, and has been known to randomly break out in song. Her men are imperfect but genuine, stubborn but likable, often kinky, and frequently their own worst enemies. They are characters you can’t help but fall in love with while they stumble along the path to their happily ever after.

For those looking to get on her good side, Jodi’s addictions include nonfat lattes, Malbec, and tequila any way you pour it. She’s also obsessed with Shakespeare and Broadway musicals. She can be found wearing sock monkey gloves while typing when it’s cold, and on the beach enjoying the sun and the ocean when it’s hot. When she’s not writing and/or vacuuming sand out of her laptop, Jodi mentors queer youth and will drop everything for live music. Jodi lives near New York City with her beautiful wife, and together they are mothers of dragons (cleverly disguised as children) and slaves to an enormous polydactyl cat.

As part of this blog tour, Jodi is giving away a $10 Amazon Gift Card!! To enter, just click the link below!