Against All Odds by Elle W Silver: Exclusive Excerpt & Giveaway!

Posted on November 23, 2019 by thebloggergirls

Exclusive Excerpt from Against All Odds

Jamie wanted Riley to kiss him again so much; he couldn’t pay attention to anything at dinner. Ben had said something about needing to go back to Bello Locus again and so they were all going. Jamie would have preferred somewhere they could be alone, but he could wait a little longer, couldn’t he?

Jamie was a virgin, another thing his illness wouldn’t let him experience. But he’d been kissed a few times, all of which paled compared to the brief encounter with Riley. He hadn’t wanted him to stop, had hoped they would go further. But both Ben and Riley were reluctant to touch him too much. They wanted to, that much was clear, but they were just too afraid to push him further away.

In the car, on the way to Bello Locus, Jamie sat between them as they told him about the friends they wanted him to meet. Jamie snuggled up to Riley, placing his arm on Riley’s chest, hoping they’d pick up where they’d left off in the office. Riley took his hand, even played with his fingers for the duration of the drive, but didn’t kiss him.

Jamie met Adam, the bartender behind the tasty signature cocktails from last night. He met Mark, Mikey’s brother and Caster, Ben’s brother, the King of the Vampires and Riley’s best friend. They were all so glad to see him, even if only Caster had been there the day old-Jamie died.

He grew more frustrated when Mark and Caster followed them to the V-VIP area they’d had all to themselves last night. His frustrations lessened when Liam and Johnny joined them, excited when Adam made them their signature drinks.

“This guy is so good. What is in these?” Johnny sounded like he’d already had a few wherever they’d been.

“He’s told no one,” Mark answered and Jamie couldn’t believe how much he looked like Mikey. He was older, that much as for sure, but they were almost impossible to tell apart. Though now that he thought about it, Mark’s hair was thicker.

They soon filled the rather large area with questions, laughter and all kinds of noise as everyone got to know everyone else. Jamie placed his hand on Riley’s thigh. He had only meant to steady himself as he moved further up the couch to.

But Riley covered the hand with his, drawing it further up his thigh. He leaned over to he was close to his ear, whispering, “I’m on to you, Sweetheart.”

Jamie kept his hand where it was. Good, he wanted him to know exactly what he was doing, maybe then he would kiss him.

You just need to ask, Ben’s voice in his had startled him so hard, he choked on the sip he’d just taken.

Ben rubbed his back as he caught his breath. He’d forgotten about the mind reading thing.

I didn’t read your mind, Mi Precioso. I can feel how much you want him to kiss you.

Tell me I’m wrong. You want all of them to go away so it’s just us.

Jamie blushed, lowering his head, but not before he saw Ben’s smile.

If I didn’t think I’d embarrass you, I’d kiss you in front of them. I’ve been dying to kiss you since the moment I saw you.

Riley leaned over again, whispering in his ear, “You wanna go home? We can if you want to, they won’t mind.”

Jamie nodded, taking Ben’s advice and before he knew it Riley had made their excuses and they were leaving. As expected, Liam and Johnny wanted to stay, but they would be just fine.

As soon as they were in the car’s privacy, Riley’s lips found his. Jamie was unprepared for the kiss he’d been longing for. But he recovered fast, latching on to Riley’s arm. He lost himself in the kiss, moaning when Riley’s tongue found his.

Jamie felt Ben’s hand on his thigh, his voice in his ear, his breath heavy, “You’re so sexy together.”

Riley broke the kiss and captured Ben’s lips. Jamie didn’t expect the simple act of the two of them kissing to be so arousing. Ben’s moans mixed in with his, Riley’s hand finding his hair, just as Ben’s squeezed his thigh.

Riley pulled back and then moved back into the seat, taking Jamie with him so that Jamie straddled his lap. Ben moved further back, occupying Jamie’s space, so close their foreheads were touching.

Riley rubbed the back of his thighs, making him wish they were at home, naked and in bed.

“You were looking at me, just as you are now,” Ben’s thumb moved to his upper lip, “So hungry. And, I felt it too. Your arousal making me want you even more.” His face moved closer, close enough that their lips brushed when he spoke, “Can you feel how much I want you now?”

Riley kissed his neck, causing Jamie to moan his answer. He kissed a trail down to his shoulder and then back to his ear, “Close your eyes, Sweetheart and feel how much Ben wants you. Do you feel it?”

Ben’s mouth swallowed his answer. He wasn’t sure which one of them closed the tiny distance between them first. All he felt was the overwhelming need to kiss Ben and then it was happening. The kiss was far more intense than the one he’d just shared with Riley who maintained his assault on his neck. Jamie hips moved on Riley’s lap as the kiss grew into an exploration, his cock seeking relief. His clothes were not helping.

“Hold on to me, tight” He heard Riley say, and he obeyed.

A second later, he broke the kiss when his breath caught, a foreign sensation invaded his body and he felt almost upside down. When he opened his eyes, he was still on Riley’s lap, with Ben still sitting close to him. But they were at the mansion in what he assumed was the master bedroom.

About Against All Odds 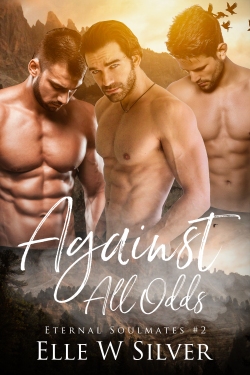 Will he find them before it’s too late?

Jamie struggles with an illness no doctor can diagnose; one that keeps him from living a productive life. Until he meets a witch who promises him a cure for a price. But when his target says he knew him in a past life, Jamie is conflicted.

260 years after they lost their soul mate, Riley struggles to hold his imbalanced relationship with Ben together. He grows more powerful even as his reasons for living shrink. His immortality came at a steep price, but when Jamie shows up out of nowhere, he may have to pay it to keep him.

Ben knows Riley loves him, but Jamie was the glue that held them together. Without him, life is unbearable even for an immortal Vampire. Until Jamie shows up one day, the same but different and he realizes they will have to fight to keep him.

Can Jamie, Riley and Ben survive the new threat to their lives? Will Jamie survive the supernatural?

Against All Odds is the second book in the Eternal Soulmates Series; a sexy saga of stories about vampires, witches, werewolves and the humans unfortunate enough to cross their path. If you enjoy steamy, emotional and action-packed romantic adventures, this story is a must-have for you.

Growing up Elle was the girl sitting in a corner with her nose in a book. For as long as she could remember, she would journey to different destinations around the world with the characters she met in the many books she read.

So when she turned fifteen, it was not surprising that she found herself ready to create her own world of characters. The Paranormal world was particularly intriguing, especially immortal vampires and the humans sharing their fascinating existence.

Her first book was not published and got lost somewhere in the midst of her life. Her love of stories- literature, Movies, and TV, only intensified as she got older, becoming a major part of her life.

Soon, she would find herself working as a freelance writer (a girl has to pay her bills) all the while sharing her life with voices in her head that screamed for an outlet. She saw an opportunity to give life to her characters when she stumbled on self-publishing and her first Paranormal romance series- The Eternal Flame Series was born.

A tea addict, Elle also has a powerful love for Music and her ever-expanding Family. She is overjoyed to share her love for Romance with all her readers and grateful for their unending support.

As part of this blog tour, Elle is giving away a $25 Amazon Gift Card!! To enter, just click the link below!