Served with a Twist by Jet Lupin: Exclusive Excerpt!

Posted on December 29, 2019 by thebloggergirls

Exclusive Excerpt from Served with a Twist

“You thought it was a date?” Samson’s smile was tight, not quite reaching his eyes.

“It wasn’t on the schedule. And you were so vague… What was I supposed to think?”

Samson chuckled, but it didn’t inspire humor. “You don’t have to worry about that. I remember our agreement about hook ups. But if you meant a real date, you don’t have to concern yourself about that either. I haven’t done anything like that in years.”

“Why not?” Yes, forget what Cut had said. Focus on that.

“I’ve got no free time for that really. For another, being like this,” he gestured to himself. “I don’t even know who’d want to be with me.”

“I am tired, but that’s not why I said that.” Samson grew more agitated as he went on, his jaw clenched. “I can make you a list of things that are wrong with me if you need one, but I can’t see why you would. You’ve got sight, you’ve met me.”

“Yeah, OK.” Cut tried not to roll his eyes. This was the stress talking. If this was as bad as Samson got, Cut had this handled, but this particular quirk… It would be better if they worked on getting rid of it right now.

Cut walked past him and sat on the edge of the conference table. He looked above the door. Since he’d arrived here, he’d been clocking Deyaa Group’s security measures, more out of habit than necessity. He noticed that the common areas, like the entrance to the reception area and the cubicle sea had cameras positioned to scan over them, more for the safety of the employees than any true surveillance. They observed who came into the areas, rather than what went on in them. It seemed the meeting rooms and offices were afforded more privacy. He hadn’t spotted a single camera hidden in any of the usual spots. But to be on the safe side, he’d confirm his suspicions. “Are there any cameras in here?”

“What?” Samson looked around agitatedly, his brow furrowed. “No. I don’t think so.”

That was exactly what Cut wanted to hear. “Then how about we have a session?” Surely he’d agree that the month had been rough and there was tension to work through?

Cut shrugged. “I don’t see why not. There’s no one else around. Seems like the perfect time to me.”

“The cleaners will be around soon, and everyone was just here and—”

“I’m hearing a lot of excuses. Doors have locks for a reason. And the cleaner droids won’t come into a locked room. Now if you don’t want to, that’s fine. Tell me so, and I’ll back off.” Cut stretched his legs out in front of him and crossed them at the ankles. “But I don’t think that’s the case, is it?”

Samson looked away. Several tense seconds beat past, and he said nothing. He raised his gaze and skimmed over Cut’s face.

“I want it…” Samson grabbed the cloth of his pants, twisting them along the sharp crease. “I just… I had trouble saying it.”

Cut thought he knew why. “Because you think it’s irresponsible?”

“Then I’ll take responsibility for this. If we get caught, I’ll say I seduced you. But for now, show me you want it and close the door. Otherwise I’ll help you pack up, and we can both go home.”

Samson turned away. Cut bit his lip. Would duty win over of Samson’s baser needs?

Cut held his breath as Samson went straight for the door. His hand hovered over the panel, as if weighing his options one last time.

There was a loud click as the locked slid into place.

He came back to Cut, hands clasped in front of him, head slightly bowed. Something about that excited Cut in a way that frightened him. This wasn’t like him. In his romantic endeavors, such as they were, there’d always been some sort of equity. They were partners, had the same wants, weren’t shy about vocalizing it. Samson did not bring those things to the table. He brought submission, obedience, all things Cut, when he thought on them abstractly, he’d determined he had no use for. He’d gotten into this to help Samson, but it felt like every time they got together, he learned something new about himself.

About Swerved with a Twist 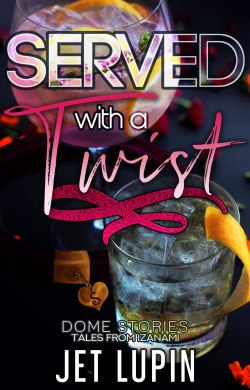 Cut Jones knows Samson from his work, but not really. He knows he’s got money, that he likes his whiskey sours extra sweet, but that’s where his knowledge ends. Samson’s come into the bar every few days for a year but has hardly said more than five words at a time, but Cut didn’t mind. Samson was out of his league. So imagine his surprise when Samson asks for his help with a very personal issue.

The pressures of owning his own company and the expectations of his father had Samson Ba walking a razor’s edge. It was only a matter of time before he tried to find a release, but when he does it’s in the worst way. And he’s found by the last person he wanted to see him this way. But things aren’t all bad. Cut offers to help him relieve his stress, and Samson’s sure he’s just being nice, but some opportunities are too good to pass up.

Stories longing to have words put to them were in Jet’s heart from an early age. Jet enjoys exploring the connections and similarities between people whether they be shifters, vampires, or aliens, rendering the unknowable very knowable indeed.

Jet’s days are spent toiling away at a keyboard, slumped over a pen and paper hunting for those words, or playing around on twitter with a partner, and two rambunctious cats for company in the temperamental North Eastern US.