Posted on January 19, 2020 by thebloggergirls

They walked up to where they had dumped their towels near the sand dunes and almost simultaneously pulled off their confining rash shirts.

With the ease of long practice, Rhys gathered his towel and shook out the sand without putting down his board, and Ollie mimicked his actions.

They were lucky enough to have a cold-water shower at this beach so getting the salt off both themselves, and their boards, wasn’t a hard task. Rhys knew he wasn’t supposed to concentrate on the way the water ran down Ollie’s very-well-formed chest and abdomen, but when the man closed his eyes against the flow of water, Rhys could no more look away in that moment than he could fly. Fine wet bodies were surely a gift from the universe, and only the ungrateful would refuse to enjoy this particular offering.

Ten minutes later, with the boards stowed in his truck and their shorts half-dry, they were standing outside the very successful coffee truck, drinking a flat white which wouldn’t be out of place in a cool inner-city cafe.

“Was it being in the water that made it more delicious or was that just a really fabulous cup of coffee?” asked Ollie, appreciatively.

“I should say being in the water made in better, but I’ve had enough shitty coffees after a surf to know that’s probably false. Nah, it’s a good cup,”

Coffees in hand, they went and leant on the fence that had been erected to protect the delicate eco-system of the bushes clinging to the dunes.

“It’s a pretty good morning routine,” Ollie observed. “Do you do it on the regular with a boyfriend or girlfriend, or just your clients?”

Yeah, the boy was too confident to bother trying for subtlety. Rhys respected his approach enough to go for a straightforward answer. “No boyfriend since I got back to Byron. So mainly just me and my clients, unless I can convince my dad or one of my mates to join me down here for a surf.”

Ollie had started smiling at his answer. “In that case we’re here for the week. Do you want to have dinner with me?” 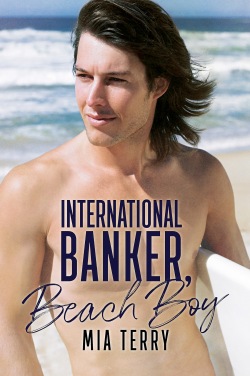 A new m/m romance set around the beautiful beaches of Byron Bay, Australia.

Oliver Gilsworth is getting a much-needed beach holiday ahead of taking the next preordained step his life of privilege demands of him.

When Ollie meets his surf instructor, sparks immediately begin to fly, but neither man is particularly interested in a brief holiday fling, and for either of them to change course at this point in his life is impossible. Or, is it?

May contain traces of Byron Bay craziness and hot men swimming naked in pools. The final book in the Country City series but can definitely be read as a standalone.

Mia Terry grew up in what could be loosely termed rural Australia. However, she has to admit that the beachside town where she currently lives has more coffee shops and cultural events than many inner-city suburbs.

“My characters break free of the coffee shop scene more bravely than me. In their more remote rural settings, they get to experience the beauty and challenges that come from living in Australia’s rural heart.

It provides them with a unique and challenging backdrop where they can connect and fall in love. The City/ Country series also shows the sometimes dirty, often sexy, fun that two hot Australian men can have.

I love reading m/m romance and I have adored writing it. I hope the readers enjoy the journeys of my different characters just as much as I did.”