Posted on February 25, 2020 by thebloggergirls

What Do You Write?

“How do you answer the question “Oh, you’re an author…what do you write?”

I have always been proud to declare that my dream was to become a published author, but once I became one, I found it difficult to answer the question “What do you write?”  I know there are people out there who look down on the romance genre (usually people who’ve never read it), and if I couldn’t gauge what a person’s reaction would be I became hesitant to admit that that was what I wrote.

As time has gone on, I have worked hard to break this habit.  I love romance. I have found some amazingly talented authors by reading romance, and I am proud of what I have accomplished within the genre so there is no reason why I should be shy about it.  I have also come to realize that there are times when it is my duty to spread the love of romance, gay romance in particular.

Last year I was interviewed about my book Ghost House.  During the interview, the interviewer told me she was surprised when she heard my name.  Jacqueline is very feminine. Having written a gay romance book, she hadn’t expected me to be so open about being a woman.  I suppose she’d been wondering if my being a woman would lessen the appeal of my book to gay men. I told her that many of the authors I knew who wrote in the gay romance genre were women.  So were many of the readers.

In fact, for years I have been reading shounen-ai and yaoi manga from Japan, my friends and I are currently devouring danmei novels from China, and I am exploring BL TV shows from Thailand and their related novels.  These things are all stories about male-male relationships and romance, and they are written by women and geared toward a female audience.

I truly believe we need #ownvoices stories and representation, but I also believe, especially in the current time period, that the world needs more happiness in general.  Romance, gay or not, should be read by everyone. It is the only place in the world where you are guaranteed a happy ending. Isn’t that something we all need in our lives?  I think that happiness is worth more than gold, and as romance authors, we are the suppliers of happiness. If that’s the case, then the next time someone asks me what I write I am going to tell them loud and proud.

About Tricks and Bids 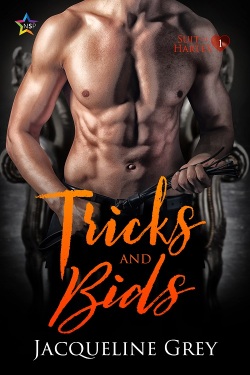 Dillon hasn’t taken another man home since his previous lover passed away six years ago, but there is something about Michael that calls to his inner Dominant in a way he cannot resist. His instincts want to claim the boy even as he reminds himself that he is only paying Michael for temporary company.

Their relationship may have started as a business transaction, but it’s difficult to remain professional when breaking all the rules.

An Excerpt from Tricks and Bids

Dillon glanced up to find a young man leaning against the hood of his car. At Dillon’s pointed look, he took a step back, so he no longer touched the automobile.

“What gave you the impression I want company?”

“And you think you’re what I want?”

Dillon peered at him. He appeared to be in his midtwenties, fit and tight in the way Dillon remembered being before he’d hit thirty-three. He was shorter than Dillon with dark-brown hair long enough to grip: two things Dillon liked in a submissive. There was something familiar about him as well. If Dillon wasn’t mistaken, he’d seen him heading into a nearby motel a few times and never with the same “date.”

“Are you a prostitute?” Dillon asked.

The blunt question evoked an expression of surprise, but it rapidly morphed into a smooth smile. “‘Prostitute’ sounds like a job. It’s more of a hobby.”

Dillon cracked a smile. “How much do you charge?”

“Depends on what you want to do.”

That was reasonable enough, and if he’d been waiting outside Harte, he must know to expect kink and charge for it accordingly. “Are you clean?”

“Yes, and condoms are necessary and at your expense.”

“Expense? That sounds like a job term to me,” Dillon teased.

He considered his options. The boy was right. He hadn’t found what he was searching for in the club, and he held no illusions he ever would. Even after six years, he couldn’t help comparing every submissive he came across to the lover he’d lost. Harte called him a stubborn old goat, but the thought of building a relationship from scratch exhausted him. It was so hard to find someone whose rhythms and tastes fit with his own. Granted, the club was designed for negotiation and mutually desired play, but that was for the scenes that took place there. What about the rest of the time?

Dillon didn’t want a casual play partner. That did nothing more for him than scratch an itch that would return in no time. He wanted someone he could build a life with. He wasn’t going to find that with a prostitute, but something about the stranger brought forth yearnings Dillon hadn’t felt in years. He could take the boy home with him, indulge in what he wanted in his own territory and under his own rules. It would be a purchased illusion, but it beat going home alone and sleeping in an empty bed.

“Come on,” he said, pulling his car door open and unlocking the other side. “We’ll talk details when we get to my place.”

“Your place? Don’t you mean a hotel?”

“My place,” repeated Dillon. “I don’t do quick fucks.”

Jacqueline has always been driven by characters. She loves a good plot, but it’s the characters that pull her into a story. She loves romance and believes everyone has a right to be happy. She enjoys seeing her characters find that happiness for themselves.