Exclusive Excerpt from The Rivalry

“Sam?” Heath’s voice was impossibly deeper, and sweeter than he remembered. Oh, you’re in deep. So fucking deep you’re never going to dig your way out—even if you tried. Even if you wanted to.

“Yeah, yeah, it’s me. Sam.” Sam cleared his throat. He sounded just as lame as he had in his voicemail, but he’d apparently lost his chill right along with his heart.

“Sam,” Heath said, with so much certainty that even Sam was reassured. He was here, his name was Sam, and Heath had called him back.

“I’m sorry I’m calling so late,” Heath continued, “I just realized what time it must be there. I didn’t get your voicemail until after practice was over.”

“I . . .” Sam suddenly didn’t know what to say. Or maybe it wasn’t so much a sudden or unexpected occurrence as it was a terrifying one. Naturally, he said the very worst thing he could. “I’ve missed you.”

There was absolute silence on the other end of the line. Then Heath cleared his throat. “Is that why you’ve discovered a predilection for throwing yourself down mountains and out of airplanes?”

There was nothing Sam wanted more than for Heath to whisper “predilection” in his ear, in that dark, deep honey voice, while he was even deeper inside Sam. “No?” Frankly he couldn’t even remember why he’d started doing it. Probably because Felicity was insane, and he’d decided to recklessly join in her insanity because the first time he’d done it, on a whim, he’d felt a little better, if only for a moment. He’d been able to focus merely on staying alive, and at the time, that had felt like a very good thing.

Sam was unsure of every single fucking thing at the moment. “Not much is making sense, right now,” Sam admitted.

“Then maybe I can help.” Heath paused. “I actually . . . I told my agent to leave off the idea of bringing you to LA. You’re good where you are. Or if you’re not, there’s lots of better places to be. We’re good here.”

Sam was breathless, the words knocked from his lungs with Heath’s words. Not only had he told his agent to drop the idea, it had never been Heath’s at all. “All good, then?”

“It’s a passing thing. It’ll pass.” Heath sounded as determined as Sam had ever heard him. That was all Sam needed to know to believe that wasn’t true at all. They both knew it, but Heath would never admit it. Suddenly, Sam was blindingly, pointedly angry. If Heath didn’t want him there, then that was the one place Sam intended to be.

Sam’s hand shook on his phone. Not from nerves. Not from the unreal arousal he felt whenever he thought about Heath. Not from anticipation. Nope—they were shaking because he didn’t think he’d ever been so pissed off in his entire life. How dare Heath get on the phone and tell him that he didn’t want him there? Sure, he’d told him during the fishing trip that they weren’t friends, but this was more than that. This was a punch straight to the stomach. Sam thought he’d learned to deal with rejection after Dane had left, but apparently not, because this was a whole new breathless, painful revelation. 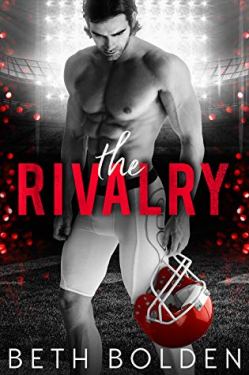 The first time NFL quarterback Heath Harris meets Sam Crawford, it’s just them, a luxury yacht and a few days of fun in the sun. Sam turns out to be nothing like Heath expects. He’s kind and funny and irreverent—and also unbelievably, shockingly sexy. For three short, glorious, life-changing days, there are no rules.

The second time they meet, Sam has just been traded to Heath’s team, and instead of lovers, they’ve become rivals instead. Heath has spent the last five years working desperately to be the best quarterback the Riptide could ever need, but when injuries threaten to derail his career, Sam is right there, standing on the sideline. Ready to take over, and ready to ruin everything Heath has given his life for.

As their orbits collide, sparks fly, and Heath struggles to find the right label and the right box to shove Sam into, hoping to keep him contained. But Sam—and Heath’s feelings—refuse to cooperate.

Sam might not be just one of those things, he might be all of them, and so much more.

A lifelong Oregonian, Beth Bolden has just recently moved to North Carolina with her supportive husband and their sweet kitten, Earl Grey. Beth still believes in Keeping Portland Weird, and intends to be just as weird in Raleigh.

As part of this blog tour, Beth is giving away a $25 Amazon Gift Card!! To enter, just click the link below!

Don’t forget to check out Nikyta’s review of The Rivalry to see what she thought of it!

2 thoughts on “The Rivalry by Beth Bolden: Exclusive Excerpt & Giveaway!”