Book Review: Behind the Lights by T.L. Travis

Posted on April 5, 2020 by thebloggergirls 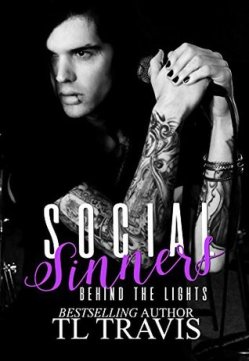 Blurb: Joey Hayes and his best friend Ricky Branson have been together through the good times, as well as the bad. Attending their first concert as teens set the path for their futures in motion. Shortly after, the pair joined band class where they meet Ethan and Mick and the foursome formed the metal band, Social Sinners.

Things were going according to plan until Lucas Shane entered their lives, disrupting the flow and testing the strength of their friendship.

When Joey spirals down a dark path after catching his cheating boyfriend, this tasked the other three band members with making a difficult decision that could end his career as their lead singer.

Behind the Lights is the first book in what, I believe, is going to be a five book series. The majority of the book is told in retrospect with Joey as its narrator, who I really liked but was really annoyed with (more on that later). In the beginning we learn about Joey and Ricky’s childhoods, their beautiful friendship, their mutual love for music and finally the concert they attend together that begins their journey as future musicians. Later, we meet Diamond and Mickey, their bandmates who they meet in high school. I loved the development of the characters with the exception of Mickey who I know very little about but I’m hopeful we’ll get to know him in later books.

One more thing I would’ve loved reading about was Joey and Ricky becoming lovers which eventually did happen, but in like the last page. All that was because how unnecessarily oblivious to everything Joey was through the majority of the book.

Alas, the only romance we got was Joey and Lucas and I felt zero chemistry between them.

Nonetheless, Ricky and Joey get together in the end so I assume their relationship will be further developed in the next book.

Although I came for the romance I stayed for the band. I’m looking forward to the next one to see where it goes, I love me some social sinners.

A thing or two I didn’t mention but liked:

-how Ricky got his nickname “Stoli”

-when they were choosing their band name…really entertaining

-how supportive their parents were, with one exception though

-the song Stoli wrote for Joey, it was heart-breaking