Bishop: A True Lover’s Story by A.E. Via: Exclusive Excerpt!

“I’ve been lying here thinking how much I wanted to have dinner with you tonight, how much I want to take you out to dinner. I can’t cook, so I’m not even going to embarrass myself there.”

Edison laughed, settling more comfortably into his soft sheets. He swept his hand over the empty mattress beside him, anxious for the day that Bishop would be lying there with him and he hoped that day would come sooner rather than later. Bishop kept talking, his rough voice luring Edison into a warm sense of comfort and slow-burning stimulation.

“Tomorrow I’m going fishing with my dad, we tried last Sunday but it stormed. But, Monday after work, I wanted to come over so I can finish clearing out the weeds against the house where the flowerbed will be. The sooner I get some chemical applications down for weed control, the better. I’m already starting pretty late in the season. It’ll only take a couple hours to finish that.”

“Okay. I may have to work late on Monday. I have a meeting with a client at four, but you can let yourself in, I never lock the gate.”

“I’ll do that,” Bishop agreed.

There was a long pause while he listened to Bishop’s deep breaths and the periodic hitches in his voice. “What are you doing?” he asked.

“Just listening to you, Eddie.”

Edison shook when he ran his hand over his bare chest as Bishop’s words raised goosebumps over his body. “I like it when you call me that,” he said, his own voice sounding off. “I don’t let anyone else call me that.”

Edison hadn’t pleasured himself in a long time but he was positive he was going to tonight. There was no way he would be able to sleep. His dick was throbbing, and crowded awkwardly in his boxers. He wanted to let it out, but he knew he’d whimper the moment his hot flesh hit the cool air, so he just barely refrained. But, god, it hurt so bad.

“I’m gonna let you go because… I just… mmmm. Yeah. I’m gonna go.” Bishop’s voice sounded strained, and just as husky as his own. “I’ll talk to you soon, handsome.”

About Bishop: A True Lover’s Story 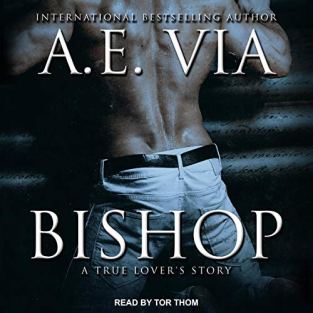 ;eAt only 32, Bishop Stockley has lived a hard-knock life. After doing five years in a federal prison, Bishop is back at his dad’s trailer and working for his landscaping company, thrust into a legit world where he’s no longer the alpha – a world where a criminal record is the least of his disadvantages, because Bishop can’t read or write.

Bishop already had the deck stacked against him, but he wasn’t afraid of hard work to change his situation, and he did want to change. Especially after he encountered Edison Scala, a kind-spirited office manager who didn’t hesitate to come to his defense…a man that saw past Bishop’s grass-stained coveralls. A man who wasn’t intimidated by his stern features and his silence.

Bishop knew Edison was off-limits. He’d made personal vows to himself when he was released from prison, ones that he never intended to break. But, when Edison asked him about providing landscaping services at his home, there was no way he could refuse. He hadn’t expected Edison to feed him, praise him, encourage him, and look at him the way he did – as if Bishop was somebody.

A.E. Via has been a best-selling author in the beautiful gay romance genre for six years now, but she’s no stranger to MM. She’s been an avid reader of gay literature for over twenty years before she picked up her laptop to place her own kiss on this genre. She’s also the founder and owner of Via Star Wings Books, having published a couple great, new up and coming MM authors.

A.E. has a Bachelor of Arts in Criminal Justice from Virginia Wesleyan College that she used to start her own paralegal firm after she graduated in 2008. She spent five years preparing and filing bankruptcy petitions for struggling blue collar workers who couldn’t afford to file with a lawyer. It was a rewarding and satisfying career… but another path called to her.

A.E.’s novels embodies everything from hopelessly romantic to adventure, to scandalous. Her stories often include intriguing edges and twists that take readers to new, thought-provoking depths.

She’s recently celebrated her 20th book anniversary, and is well-known for her hardcore, love hard, bad boy, alphas. However, she does like to push herself to step out of her comfort zone, exploring different tropes. She’s head over heels for gay romance and she has tons of more hot stories to tell.

Be sure to visit Adrienne on her social media pages and subscribe to her newsletter to never miss another release date! Go to A.E. Via’s official website http://authoraevia.com for more detailed information on how to contact her, follow her, or a sneak peek at upcoming work, free reads, VSWB submissions, and where she’ll appear next.