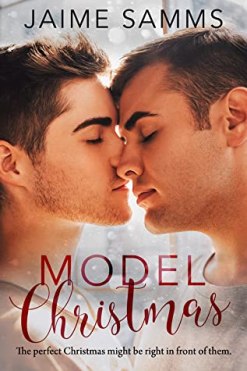 Blurb: Sebastian ‘s ideal Christmas looks nothing like his picture-perfect childhood experiences, but neither should it be spent wandering the cold streets alone and homeless.

Cody has no time for the holidays if he wants to eat. He needs a new model for his next commission–and he needs him now.

Seb can’t go home and Cody’s model took his pay and left. Both men are in dire straits, so when they meet over soup-kitchen chili they each see the answer to their problems in the other.

They never expected more than a means to an end, but now, that perfect Christmas might be as simple as seeing what’s right in front of them

I have enjoyed Jaime Samms’ stories before – and because it’s still January, the holiday vibe is still rather strong. That’s why, I welcome the chance to read this one. Unfortunately, while I liked the set-up enough, the overall romance felt a little underdeveloped.

First of all, I thought there were too many references to Seb’s ex who walked out on him. Apparently, he also had relationship with Cody, the artist. Seriously, this should be a story about Seb AND Cody, and I felt Terry was mentioned too much, he was an intrusive secondary character that wasn’t even there.

Second, after Seb found himself staying with Cody, the story abruptly done not long after. I would’ve loved to read few more pages to see everything tied up a little nicely.

Third, Seb’s family status was also a bit too out there. What was the point to adding THAT kind of information about his identity?

Having said so, Samms writing is nice. And just I said in the beginning, I liked the set-up enough. I thought Seb and Cody as individual had quite strong characters. I liked both men, individually as well.