Mattias should protest. Honestly, he should, but the photographer is back in his face and he tries to remember where this Pablo has told him to put his hips. Not that he doesn’t look a twat standing there in a t-shirt that is several sizes too small for him, where his nipples are poking through the thin fabric and his arms are getting goosebumps from the fan directed at his face to make his hair move. Well, there is so much gel in his locks that it probably wouldn’t move if a hurricane swept through the studio, and that Pablo is nowhere to be found to rescue him, so he just resigns himself to the photographer hurling instructions at him and demanding that he pouts.

He knows he can veto the photos, and somewhere in the deep dark pit of his stomach, he knows Danijel won’t let him look like a complete arse. Even though the said man is now dragging him off into a dark corner, letting a small giggle rip loose as the tips of his fingers poke at Mattias’s gelled-back hair.

“You look weird, man.” He says, but his eyes are twinkling and Mattias just stares at him.

“Please let me out of this hell…” Mattias begs.

“No way, Matt, my man. This is going far too well. Far too well.” Danijel’s grin is evil. “I have ten contestants in place, all are checked in. I have the most awesome host, and Caroline. Oh, thank God for Caroline. I don’t know how we let her walk all those years ago, because nobody manages the floor better than Caroline.”

He lets his eyes follow Danijel’s gaze over to where Caroline is shouting into the headset that is now clipped into her ear as she gestures wildly at someone at the back of the studio.

“Now watch this, and tell me that we are not creating magic.” Danijel whispers, then shouts out, “Silence,” and, on cue, the room falls into complete quiet. It’s a well-built-in word in the industry. One little word that makes everyone tiptoe on their rubber-soled feet. It makes movements slow down to careful gestures. Voices effortlessly quieten down to whispers.

Mattias can see one of their resident cameramen swing his dolly into position, showing that he is ready and rolling as the lighting almost blinds the man walking through the unmanned baking stations, letting his hands gently touch one of the bright red baking machines before he looks up, his eyes focusing on the camera lens and his mouth curling into a blinding smile.

Mattias watches on the side monitor, as Danijel’s breath hitches in anticipation. The man on the screen is taking his time and the practical side of Mattias is already thinking that they will need to shout, “Cut!” But, at the same time he is mesmerised. The man is, well, Mattias has never seen him before, yet of course he has. He knows who this guy is. He would recognise his voice, that deep baritone vocal that the country seems to have fallen in love with, anywhere. He’s tall and sleek, curves and angles in all the right places. Dark hair neatly cropped back into the man’s signature style. His skin flawless and powdered into perfection. His eyes pierced at the lens.

“Christmas is my favourite time of the year, when families come together to spend quality time with the people they love. Where guestrooms are prepared for visitors from far away, where friendships are reunited, and gifts are exchanged. Where sometimes religion plays a part, and sometimes our celebrations just centre around that little thing we call love. Where we look after those we care for, where we show each other friendship and gratitude. Where we thank those of us who have helped us throughout the year, people like our teachers and medical staff, and where we tell those close to us that they are needed and cherished. And even though we may not see each other every day, at this point of the year, we make the time to meet. To bond. To love each other just that little bit more. That is what Christmas is to me, and then, of course, I would be on the completely wrong show if I don’t mention the thing that Christmas is really all about.”

The man stops again, letting his body lean just that little bit forward as the camera zooms back. And Mattias breathes out. He shouldn’t have been holding his breath, but this, the very first minutes of a show can make or break a series. It needs to be right and if they have to film it again, and again, so be it. Not that they will have to reshoot shit with the guy on the monitor popping a biscuit in his mouth. Where the fuck was he hiding that biscuit?

“Because Christmas is all about food, drink and…” The man wriggles his half-eaten biscuit, sporting that shit-eating grin and a crumb on his chin, as all the deep dimples on his face show. “Baked goods.”

He laughs and Mattias now almost shouts “Cut!” himself. The guy is chewing his biscuit and leaning casually against one of the worktops, angling his head and flashing that smile again.

“Ladies and gentlemen. Boys and girls. Welcome to this very special Christmas edition of Baking Battles, where some of our most loved celebrities will show off our fantastic range of Norwegian Christmas traditions, some old, some new and some with a new twist no doubt. So sit back and grab yourself a glass of Gløgg, and get ready for the most wonderful season of baking, cooking, laughing, and yes, of course, there will be drama and tears. It wouldn’t be Baking Battles without them, now would it?”

He steps forward again, stopping only to cross his arms over his chest, showing off just the right amount of muscle tone through the thin designer shirt spray-painted onto his body, as he smiles again.

“I’m Christopher Pedersen, and this, is Baking Battles.” 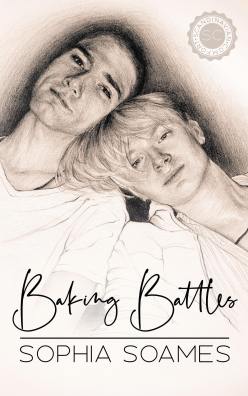 Mattias Strømme’s life is a recipe for disaster. He is a single dad of a 2-year-old, has an ex-wife who scares him, and a job in finance where he scares everyone else. And now he has been dragged in as a last-minute filler contestant on Baking Battles, the hit reality baking show. Mattias can’t bake. He can barely dress himself in the morning, and he definitely hasn’t got the skills to charm the viewing public, or the wannabe celebs who make up the rest of the show’s contestants. He’s not a nice person. He’s just… nothing. Mattias left his wife when life became unbearable for him and he fell apart. Now, when he is suddenly drowning in a mess of rumours, male supermodels, and unicorn glitter? Will Mattias be brave enough to stay? Or strong enough to walk away?

Sophia Soames should be old enough to know better but has barely grown up. She has been known to fangirl over tvTV -shows, has fallen in and out of love with more popstars than she dares to remember, and has a ridiculously high-flying (un-)glamourous real-life job.

Her long-suffering husband just laughs at her antics. Their children are feral. The Au Pair just sighs.

She lives in a creaky old house in rural London, although her heart is still in Scandinavia.

Discovering that the stories in her head make sense when written down has been part of the most hilarious midlife crisis ever and she hopes it may long continue.