Exclusive Excerpt from Lost in the Florist

During the ten minutes it took Emmett to get the flowers out of the truck, he kept glancing at the front door, expecting the person inside to be watching him and laughing, but there wasn’t anyone. Thank God. Once he freed the gorgeous beast, he walked over the walkway that crossed the front of the cabin and up a steep set of wooden stairs. There was a little patio set on the front porch to his right as he stepped in front of the front door and rang the bell. He held the bouquet in front of him as he waited for the door to swing open. He sighed as he waited. He’d hate to leave the bouquet outside but he was going to have to if no one was home. He turned, setting his back to the front door, and scanned the area. There weren’t any other cars. There wasn’t any noise aside from some birds chirping and the wind blowing through the trees. He glanced up through the tree canopy and snorted. Rain. Right. He glanced away again as the canopy moved and a beam of sun hit him in the eye.

There was a sound of metal behind him and he turned around. It was like one of those moments on daytime TV: all in slow motion. Jax Barrett was standing in the doorway. His floppy “grab-me-while-we-kiss” chestnut hair sliced across his forehead accentuating his thick eyebrows that were balanced by the scruffy five o’clock shadow. His lips … lord, his lips. They just naturally look slightly puckered: kiss-me-lips. Emmett wanted to admire the rest of Jax, but his gaze was locked on Jax’s mesmerizing light sapphire colored eyes that seemed to bore directly into his soul, taking his breath away.

“Emmett,” he said, his cocky grin spreading wider as he reached one arm over his head and held onto the door, like a flirty guy offering himself up. Which was crazy, because this was Jax, and Jax was straight.

About Lost in the Florist 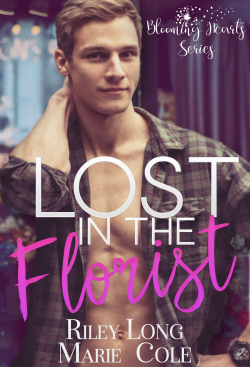 A fast-paced, sexy romance in the woods that will make Smokey Bear come running.

Jax fled his small hometown eight years ago to make it big in LA. His music career took off and he hasn’t been back to see his childhood best friend Emmett–his first, unrequited love–since. No man has lived up to that first love, though Jax has certainly tried.

When he finally gets a vacation, Jax decides to put his playboy ways behind him, surprise Emmett with a visit, and finally lay his feelings on the line. But Emmett has a few surprises up his sleeve, too–including one big secret. Emmett is a virgin.

Riley Long is a wife and mother living a quiet life in Virginia, with her husband, son, and one goofy pit bull. She passes her evenings writing, reading, and watching bad television (or not so bad television). For fun, Riley participates in NaNoWriMo, GISH, and reads with her book club, the BAMFs. She likes things with silly acronyms. The craziest thing Riley has ever done involves whipped cream and hugs. Riley writes sweet and sexy romance, with a special place in her heart for hipsters and musicians.

Marie Cole is the author of the contemporary romance #JustFriends Series. Lost in the Florist is her very first boy/boy romance and she’s super excited to be stepping into the m/m arena beside her writer bestie, Riley Long.

She is currently living in Virginia, is a self-professed Kwave addict, Karaoke Queen, and social binge drinker. When she’s not writing she’s taking photos of everything from her fluffy cat Dustpan to birds conversing on her porch. She loves to show them off on her Instagram account.

As part of this blog tour, the authors are giving away 2 ebooks of Lost in the Florist and 2 ebooks of winners’ choice from Riley Long’s backlist!! To enter, just click the link below!