“Coffee?” Scotty called as he walked into their bedroom, carrying a tray.

“Thank you, sweetheart,” Thando replied. “Just what I was getting up to do. Are the cubs awake?”

“Nope, though how they slept through the night last night, I have no idea.” Scotty winked.

“Do you know what he did with his finger?” Abe laughed.

“No, but judging by your angle and mine, and where Thando was, I can only guess.” Scotty laughed.

“Yes, you would be right. Let me show you, Scott, babe,” Abe said smiling.

“No, please don’t,” Scotty groaned. “We can’t get into that again. I heard movement on the stairs.”

Abe flat out laughed at Scotty’s insistence of not being shown. Abe was getting good at projecting pictures to Scotty; they had been practicing a lot.

“And is that because of the movement on the stairs, or you just don’t want to sweetheart?” Thando asked with a firm face, trying not to smile.

“I want to, trust me. Maybe you will do that later to me,” Scotty joked, though he smiled the same cheeky smile he reserved only for his mates.

“I will,” Thando promised, then winked. “Now, I think we had best get up. We have another long day today. ’What are your plans?”

Abe moved closer to Thando, pulling him down for a kiss. He pushed his tongue inside. Thando moaned.

Scotty put the tray on the bedside table and crawled up the bed between them both, joining them. Thando wrapped his arms around him, hauling him closer. Three tongues, three sets of lips, all now dueling together, all panting.

Scotty gasped. “I love you I’m down with training the omegas. We are doing protector training with them,” Scotty explained as he came up between them both for air. “It’s bringing the quiet ones along really well. Berry is making progress. He can now stand in front of the Alphas without crying.”

“What? How?” Thando whispered, still holding Scotty to him.

“We turned his fright into anger, and now he has a wicked left hook,” laughed Abe. While gauging Thando’s face, Abe and Scotty had decided to tell him, hoping he would help them if they needed it.

“Do you also train, Abe?” Thando asked, his head titled to the side.

“Yes, even now. We use the bags, so we don’t hurt each other, especially being pregnant. No one is at risk, Thando. ’Don’t worry. With Todd, Scotty, and I pregnant, Jace is training us all. We have some great plans,” Abe explained, though Thando’s face was one of shock.

“I didn’t know. Wow. I’m really proud of you both,” Thando gasped.

“I’m a protector, Thando. I felt it was time. Jace and Todd. Too. Our omegas are not like other omegas; we want a whole unit of protector omegas. It’s a surprise, Thando. This is a secret. Don’t you tell on us, not yet, please,” Scotty whispered, though Abe nodded his head in agreement.

“I won’t. I promise,” Thando said. The look of pride on his face warmed both Scotty and Abe’s hearts. 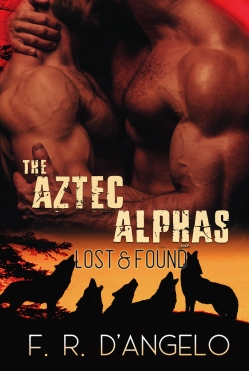 Catch up with The Aztec pack, as four traitors are found Azkin offers a compromise in order to save the packs Omegas, will the traitors take him up on it or will they run?

Aztec Warriors Angel and Brad are not happy to sit this one out, in order to keep many omegas safe, they agree.  Many first rescue omegas are now much stronger and have been training with Warrior omega Scotty in secret.

The omegas want equality and too fully train with the main Aztec protectors and warriors, the only way to allow that is to go head to head in war games with the Aztec protectors, as mate is pitied against mate will the omegas back down?

The pack is attacked from all sides by a force of Theta wolves, attempting to steal pregnant omegas, Azkin puts a kill order on those who dare come onto Aztec pack lands.

Stragglers from packs across the United States start to arrive in a pitiful condition, Azkin turns to the Ancestors for guidance.

As the prophecy looks like it will unravel, The Warriors need to prepare to enter the Callum Medical Facility to bring home Joe’s mate, Adam, though surprise awaits Joe inside the facility.

Follow the Aztec pack, as each new rescue brings heartache, pain, and hope. More twists and turns as some loopholes are closed and others are opening up.

I live in Northern Ireland. Mom to two kids, totally crazy goings on in our house so it’s not surprising I write gay romance, paranormal shifters. Archangels and angels.

I love to channel the characters who waltz into my mind, they refuse to leave until I write their story.
The magic of the spirit/other world is in the books I write. I am a Spiritual and Psychic medium, and we all need a little magic in our lives. I am a spiritual teacher I walk many roads.

I am often found with my head a book, or earphones on as I listen to a book, or I am writing.

The biggest challenge so far has been the dyslexia. I have a set routine, and many people do not run on the same timeline as me, it’s been frustrating. Though lots of coffee seems to help, the animals in my life ground me.
My passion lies with the paranormal of our world, as well as a love of Sci-fi.

I have a rescued cat Theodore, the rescue advertised looking for homes for black cats no one wanted them. I also am mom to three Boxers, Dante, Khaleesi, and Sorcha. And nanny to my daughters two dogs, boxer Aria litter sister to Khaleesi, and brother Dante. Also a little mongrel Riley.

I love showing dogs this takes me out of my head and away from the computer, it brings out the competitive in me. It also helps me hone the vision of boxers for the future helping to promote the breed.

This gives me something to do outside of sitting in front of the PC, Training the dogs in protection as well as the showring. I am looking forward to 2020 in the showring, and 2020 for personal writing goals.