Posted on August 26, 2020 by thebloggergirls 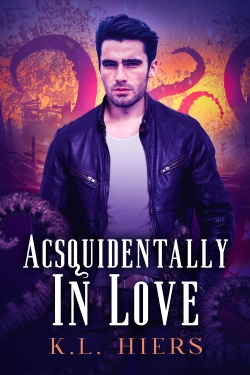 Nothing brings two men—or one man and an ancient god—together like revenge.Private investigator Sloane sacrificed his career in law enforcement in pursuit of his parents’ murderer. Like them, he is a follower of long-forgotten gods, practicing their magic and offering them his prayers… not that he’s ever gotten a response.Until now.Azaethoth the Lesser might be the patron of thieves and tricksters, but he takes care of his followers. He’s come to earth to avenge the killing of one of his favorites, and maybe charm the pants off the cute detective Fate has placed in his path. If he has his way, they’ll do much more than bring a killer to justice. In fact, he’s sure he’s found the man he’ll spend his immortal life with.Sloane’s resolve is crumbling under Azaethoth’s surprising sweetness, and the tentacles he sometimes glimpses escaping the god’s mortal form set his imagination alight. But their investigation gets stranger and deadlier with every turn. To survive, they’ll need a little faith… and a lot of mystical firepower.

An Excerpt from Acsquidentally in Love

“I’m sorry,” Loch said suddenly, his attention stolen away from the television and focusing intently on Sloane.

“What?” Sloane turned his head, staring in shock. He didn’t think gods were much on apologies.

“I obviously caused you great discomfort with my actions earlier today,” Loch explained, his hand reaching for Sloane’s, “and yes, while I am a trickster… I don’t aim to always be a complete bastard.”

“I got this for you,” Loch said, a tentacle reaching over to present Sloane with an incense bowl. “It upset you, but… it also brought you joy. I thought you might like to have it.”

“This is from the museum!” Sloane gasped, recognizing it immediately as the one that had reminded him of his mother’s. “You stole this? Loch! How did you, it, it was in a glass case! We need to take it back!”

“Technically, the museum stole it from my family,” Loch said smugly. “It was an offering for my aunt, and I was merely making an effort to return it to its rightful owner. Since she’s asleep, it’s my responsibility to liberate it on her behalf. I am now giving it to you.”

“Then please take it,” Loch urged, “with my most sincere apologies.”

“Thank you.” Sloane was touched and looked over the bowl with a helpless smile. It was as good of an apology as he would likely ever get from an immortal being, with or without the well meaning theft. Suspicious, he added quickly, “I’m still not going to have sex with you.”

“No, we won’t,” Sloane said despite a big grin creeping onto his face. He didn’t pull his hand away, letting their fingers tangle together even after he put the incense bowl aside. It felt nice.

A few more sips from his drink and Sloane ended up cuddling against Loch’s side with his arm around his shoulders. That was nice too.

“Do you… uhm… do you want something to eat?” Sloane asked quietly as the hour grew late, and he realized that sandwich was the only thing either of them had had all day.

“Would you like… something?” Loch asked innocently, his tongue swiping slowly over his lips to indicate he was definitely not talking about food.

Loch shifted, using his arm around Sloane’s shoulders to pull him closer. He cradled Sloane’s face, fingers running into his hair as he purred, “Are you absolutely sure?”

No one had ever looked at Sloane the way Loch was right now, with such heat, such adoration and raw desire. It made his blood pump excitedly and his breath catch in his mouth before he could properly inhale.

Loch nosed along Sloane’s cheek, sighing, “Why are you so afraid to let yourself experience pleasure with me?”

“I don’t just go around ‘experiencing pleasure’ with people!” Sloane protested even as his voice cracked when he felt Loch’s tongue slide along the edge of his ear. “Fuck….”

“Why not?” Loch asked, his breath hot and husky in Sloane’s ear.

“Because… because….” Sloane couldn’t think straight, stammering to think of an answer. It was impossible to gather his thoughts with Loch’s tongue at his ear and his fingers curling so sweetly through his hair.

“When I’m with someone, I want it to mean something,” Sloane said finally, his head foggy and trying to remain firm. “I want something that will last.”

“Fuck it,” Sloane hissed, dragging Loch into a hot kiss, shoving his tongue into his mouth with a loud moan.

K.L. “Kat” Hiers is an embalmer, restorative artist, and queer writer. Licensed in both funeral directing and funeral service, she’s been working in the death industry for nearly a decade. Her first love was always telling stories, and she has been writing for over twenty years, penning her very first book at just eight years old. Publishers generally do not accept manuscripts in Hello Kitty notebooks, however, but she never gave up.

Following the success of her first novel, Cold Hard Cash, she now enjoys writing professionally, focusing on spinning tales of sultry passion, exotic worlds, and emotional journeys. She loves attending horror movie conventions and indulging in cosplay of her favorite characters. She lives in Zebulon, NC, with her husband and their six children, three of whom have paws and one who sometimes thinks he does.

As part of this blog tour, Kat is giving away a a $15 Amazon gift card and FIVE ebook copies of Acsquidentally In Love!! To enter, just click the link below!