Posted on October 9, 2015 by thebloggergirls 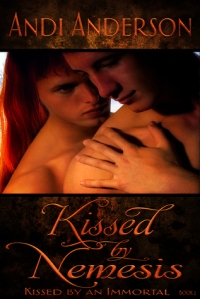 Blurb:  Jared lived an ordinary life until the day he was kidnapped because of his twin brother’s evil deeds. Days later, he comes to the horrific conclusion he will not be saved. Just when he’s lost all hope, out of nowhere an ethereal looking man appears and Jared begins to believe this gorgeous creature just might be his salvation after all.

Nemesis has one job to do. He must follow the laws of fate and sit in judgement of mortals. When Nemesis is called to witness the dire circumstances surrounding Jared because of his brother’s cruel choices, he is surprised when the helpless mortal can see and talk to him.

Instinctively knowing Jared is his forever mate, Nemesis breaks the laws of fate and saves Jared’s life, in turn threatening his own existence. Only Jared’s unconditional love and acceptance will seal their destiny together, but will his mortal be able to face the harsh judgement of what’s to come?
END_OF_DOCUMENT_TOKEN_TO_BE_REPLACED