Posted on January 17, 2016 by thebloggergirls 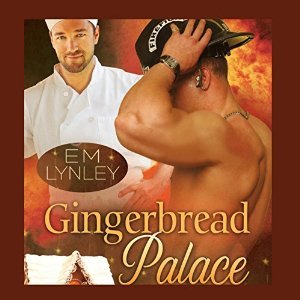 Blurb: A week before Christmas, Alex Bancroft’s bakery goes up in flames. When he runs back inside after a dog, firefighter Kevin Flint has to rescue Alex—and Quincy—from the smoldering building, endangering them and inflaming Kevin’s resentment.

Now Alex can’t create the elaborate gingerbread house he donates to a foster-kids charity each year. Fire Station 7 again comes to his rescue, offering their kitchen and their manpower.

Everyone but Kevin Flint, that is. A third-generation firefighter, he’s fearful of stepping too far out of the closet. So when his powerful physical attraction for Alex ends in a sizzling secret encounter in the firehouse, Kevin can’t push Alex far enough away, and Alex returns the cold shoulder.

After a change of heart, Kevin risks his life to prove he’s worthy of Alex’s affection, but without a Christmas miracle, their chances at sweet romance might go up in smoke.

Like all Delectable stories, Gingerbread Palace includes recipes used in the book.
END_OF_DOCUMENT_TOKEN_TO_BE_REPLACED

Posted on December 28, 2015 by thebloggergirls

Blurb: Jeremy Linden’s a PhD student researching an HIV vaccine. He’s always short of money, and when biotech startup PharmaTek reduces funding for his fellowship, he’s tempted to take a job at a men’s dining club as a serving boy. The uniforms are skimpy, and he’s expected to remove an item of clothing after each course. He can handle that, but he soon discovers there’s more on the menu here than fine cuisine. How far will he go to pay his tuition, and will money get in the way when he realizes he’s interested in more from one of his gentlemen?

Brice Martin is an attorney for a Silicon Valley venture capital firm. When he’s asked to take a client to the infamous Dinner Club, he finds himself unexpectedly turned on by the atmosphere and especially by his server, Remy. He senses there’s more to the sexy young man than meets the eye. The paradox fascinates him, and he can’t get enough of Remy.

Their relationship quickly extends beyond the club and sex. But the trust and affection they’ve worked to achieve may crumble when Jeremy discovers Brice’s VC firm is the one that pulled the plug on PharmaTek—and Jeremy’s research grant.
END_OF_DOCUMENT_TOKEN_TO_BE_REPLACED

Posted on July 8, 2014 by thebloggergirls

Thank you very much to the Blogger Girls for having me visit today! It’s my first time here so I better be on my best behavior.

My new release BOUND FOR TROUBLE is a story I’ve been thinking about for several years. I had the spark for the story while watching TV. There was a scene where a cop or FBI agent has the target of the investigation under surveillance, including cameras in his house. The agent watches the target with the same woman on several occasions. He gets turned on, but he also finds himself falling for the woman and wanting to meet her.

I decided I would use a scene just like this. My FBI agent Deke is watching the target with Ryan, a confidential information. Deke is really turned on, but he has to play it down because he’s not the only one in the surveillance van. He feels a little dirty and guilty, but at the end of the shift, he burns the surveillance footage onto a DVD to take home and watch while he’s alone.

And then I had to figure out a whole story to go with that scene and set-up.

I’m a bit of a voyeur myself, so this scene and how it played into the surveillance appealed to me in a lot of ways. I loved the idea of the agent forming a sort of connection with a confidential informant he watches with the target, and having that be the transition from an on-camera sexual thrill (voyeuristic and one-sided) to forming some real feelings for Ryan as he continues to watch and to work with him, then eventually to a face-to-face relationship that was mutual between the watcher and the watched.

And to make it more fun, and a bigger conflict for my FBI agent Deke, I made Ryan a rent-boy turned confidential informant Deke sends to start a relationship with the target, our villain, Maksim Petrov. Ryan’s the complete opposite of Deke in almost every way, but the chemistry between them takes their interactions even beyond their physical attraction.

About Bound for Trouble 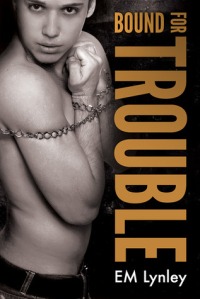 Daniel “Deke” Kane is a broken man, facing the end of his career in the FBI. He’s on desk duty after a botched drug raid left the suspects and two children dead. He’s got one chance to prove himself, or the only thing he’ll be investigating is the Help Wanted ads.

Ryan Griffiths has been on the run for ten years. Forced onto the streets when his father kicked him out, Ryan earns his living in other men’s beds. Finding his john dead in a hotel room drives him under the radar until a favorite client gives him a chance at a safe, clean life. But Ryan’s relatively stable new world shatters when Deke Kane catches up with him.

An Excerpt from Bound for Trouble

“With Petrov training me, I’ll be at his place more. That’s what you wanted, right?” Ryan glanced at Deke.

“But not at this expense.”

“You should find a way to punish me.” Ryan grinned.

“How is that a punishment?”

Ryan shrugged. “It depends how big your dick is.” He reached a hand out, and Deke caught it, smiling.

“Do you ever relax?”

Deke stared at Ryan. “Sure.”

Ryan knelt down between Deke’s knees.

Deke put his hands on Ryan’s shoulders, stopping him from moving. “Yes, I can do something just because I want to.” He pulled Ryan in close and pressed his mouth to Ryan’s.

EM Lynley, a Rainbow Award winner and EPPIE finalist, has worked in high finance, high tech, and in the wine industry, though she’d rather be writing hot, romantic man-on-man action. She spent 10 years as an economist and financial analyst, including a year as a White House Staff Economist, but only because all the intern positions were filled. Tired of boring herself and others with dry business reports and articles, her creative muse is back and naughtier than ever. She has lived and worked in London, Tokyo and Washington, D.C., but the San Francisco Bay Area is home for now.

She is the author of Sex, Lies & Wedding Bells, the Precious Gems series from Dreamspinner Press, and the Rewriting History series starring a sexy jewel thief, among others.

The prize in this blog tour is for a chance to win a $15 gift certificate to Dreamspinner Press! To enter, just click the link below!

Don’t forget to check out JustJen’s review of Bound for Trouble to see what she thought of it!

Blurb:  Daniel “Deke” Kane is a broken man, facing the end of his career in the FBI. He’s on desk duty after a botched drug raid left the suspects and two children dead. He’s got one chance to prove himself, or the only thing he’ll be investigating is the Help Wanted ads.

Ryan Griffiths has been on the run for ten years. Forced onto the streets when his father kicked him out, Ryan earns his living in other men’s beds. Finding his john dead in a hotel room drives him under the radar until a favorite client gives him a chance at a safe, clean life. But Ryan’s relatively stable new world shatters when Deke Kane catches up with him.