Audio Review: Fall Down the Mountain by P.D. Singer

Posted on January 30, 2015 by thebloggergirls

Blurb: Every night ski patrol Mark McAvoy relives the avalanche that took a life on his watch. Emotionally fragile and single by choice, he’s aghast at his friends’ taking charge of his social life. Hosting a potluck will at least provide him with a good meal.

Invited to the potluck on a whim, Allan Tengerdie catches Mark’s eye—and taste buds. This cuddly chef could be perfect for a lonely, too-thin skier; too bad Allan falls better than he skis. When Allan’s injured and frightened he’ll lose his catering company, he’s afraid to ask too much of a man he barely knows.

Mark wants to help but has his own problems. Was the avalanche a tragic accident or cold-blooded murder? His role in the inquiry leaves Mark in trouble at work, at the mercy of the law, and with too much time on his hands. If he clings tightly to Allan, will they be swept away together?

Bonus Story: Storm on the Mountain

A blizzard shuts down the ski resort, giving Mark a chance to show Allan he’s learned from his mistakes. Does he know Allan well enough now to say what’s in his heart?

END_OF_DOCUMENT_TOKEN_TO_BE_REPLACED

Audio Review: Fire on the Mountain by P.D. Singer

Posted on October 31, 2014 by thebloggergirls 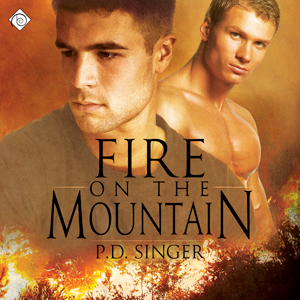 Blurb: Take a break from academics, enjoy the Colorado Rockies, fight a fire now and then. That’s all Jake Landon expected when he signed up to be a ranger. He’ll partner with some crusty old mountain man; they’ll patrol the wilderness in a tanker, speak three words a day, and Old Crusty won’t be alluring at all. A national forest is big enough to be Jake’s closet—he’ll spend his free time fishing.

Except Old Crusty turns out to be Kurt Carlson: confident, competent, and experienced. He’s also young, hot, friendly, and considers clothing optional when it’s just two guys in the wilderness. Sharing a small cabin with this walking temptation is stressing Jake’s sanity—is he sending signals, or just being Kurt? And how would Kurt react if he found out his new partner wants to start a fire of a different kind? Jake’s terrified—they have to live together for five months no matter what.

Enough sparks fly between the rangers to set the trees alight, but it takes a raging inferno to make Jake and Kurt admit to the heat between them.

Bonus Short Story: Into the Mountains

Long before he met Jake, Kurt Carlson climbed Yosemite with his best friend, Benji. But after a storm traps them halfway up the face of El Capitan, Kurt has to accept that their friendship isn’t what he thought.
END_OF_DOCUMENT_TOKEN_TO_BE_REPLACED