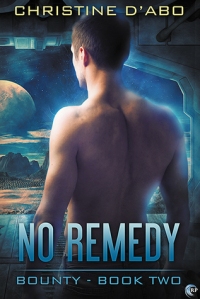 Blurb: For months, Mace Simms has been seeking an antidote for the poison killing her mentor. Her only hope is Alec Roiten, a brilliant scientist hiding on a backwater planet. Posing as a research assistant, Mace offers the elusive genius all the help she can, ignoring the explosive chemistry between them. Soon they’re close to a cure.

But then Alec’s former love Byron shows up, attempting to claim a bounty on Alec’s head, and all that careful research gets left behind when they’re forced to flee. And when Byron realizes the tip-off about Alec was a ruse by his rivals to lure him out into the open to kill him, the bounty hunt turns into a three-person scramble for survival.

Byron wants his old lover back, Alec is consumed by a haunting secret about the poison he’s desperate to defeat, and Mace is caught between them. But she’s beginning to think that’s exactly where she belongs as the three are drawn together in their race against death.
END_OF_DOCUMENT_TOKEN_TO_BE_REPLACED