Posts Tagged With: His to Save

Release Blitz: His to Save by Ari McKay + Giveaway!

Posted on October 15, 2018 by thebloggergirls

His to Save by Ari McKay 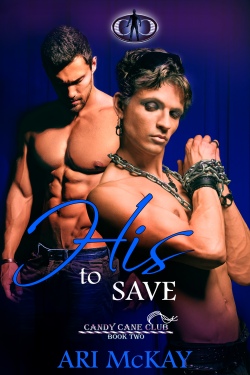 He’s the perfect sub — gorgeous, responsive, and yet aloof, and every Dom at the Candy Cane fantasizes about claiming the sub who calls himself Saiph.

Nick Tierney sees through the facade of utter submission Saiph projects, and his instincts tell him Saiph has some complicated issues. He would love to help Saiph, but his desire seems hopeless in the face of Saiph’s adamant refusal to do a scene with any of the gay male Doms. Then Saiph offers himself up at the Candy Cane’s charity auction, and Nick seizes the opportunity to claim Saiph for himself, if only for a single night.

The chemistry between them is electrifying in its intensity, but Nick also comes away convinced Saiph needs help. Can he convince Saiph to take a chance and let down his guard enough for Nick to discover a way to help him heal? Or will Nick’s rapidly deepening feelings drive Saiph away for good?

END_OF_DOCUMENT_TOKEN_TO_BE_REPLACED

Categories: Book Promo, Giveaways, LGBT, Published in 2018 | Tags: Ari McKay, His to Save, The Blogger Girls | Leave a comment