So, the winners of a Swimmer by Louis J. Harris are… END_OF_DOCUMENT_TOKEN_TO_BE_REPLACED

Last month, I celebrated the launch of my new series, Underground Elves, with the first book Catching Kit (a re-release) out from Love Lane Books.

Catching Kit is an m/m paranormal tale set in London, the city near which I grew up. Although all of my books save one all-out fantasy story have UK settings, the Underground Elves series are the only ones rooted in the capital. While working on the second book in the series, I’ve been wondering why my characters have wandered into this marvelous city so rarely.

While all cities have unique aspects that make them great settings, London has got to be one of the best. The centre is crammed with two thousand years of history, reaching back to the Romans and beyond, and there are so many famous landmarks it would be patronizing to list them. It’s often the less well known corners that capture the imagination…though in London, it’s difficult to find many true secrets.

A scene in my new book was due to take place in churchyard of The Actor’s Church in Covent Garden, a quiet oasis in the middle of the bustle where I used to eat lunch. Not that famous, right? Wrong. I recently started to read Ben Aaronovitch’s Rivers of London series (an urban paranormal that I’m enjoying very much) and lo and behold, the opening ghost-related action takes place in this very spot. In my books, the characters explore some of the “ghost” stations – closed and derelict underground railway stations. Even these are getting very famous. The old Aldwych (Strand) underground station, opened in 1907 and shut in 1994, is a popular filming location. It was recently used for Sherlock. And nobody saw that, right?

Fortunately, I still have some secret locations and some great London stories to share…though I’m going to save them for the series. There’s certainly no better city in which to be setting a story about a group of elves who’ve been traveling forward through history for hundreds of years. I very much hope some of you will join us on the journey.

Thank you for reading and thanks to The Blogger Girls for letting me blog.

Denny is a top secret agent on a mission to protect London from Ethereal Beings – elves – who are seen as dangerous mind-reading parasites who prey on human emotions.

Kit is an elf on the run, misunderstood and persecuted by humans. When Denny catches him, he shatters everything Denny’s been taught about elves. He’s gorgeous and funny and claims he’s been searching a long time for a guy like Denny. He shares Denny’s kinks and now he needs Denny’s love to survive.

But if Denny doesn’t take Kit to jail, he’s in big trouble. Dare Denny break the law and gamble his life to save the Ethereal Being in his bed?

Please note: This is a revised version of a previously released title.

An Excerpt from Catching Kit

“You must be starving.” Kit placed one of the plates in front of Denny. Then he sat down opposite, pronged two tubes of pasta with his fork, and popped them into his mouth. He slowly licked white cheese sauce from his lips, and Denny fought a faint ache in his groin. “Yeah, elves do eat. At least we do when we need to. And this isn’t bad, is it? It’s better than gingerbread and those little sets of dried herbs. I ate those for a month. Oh, and boiled sweets.”

And Kit still had such gleaming teeth? Okay, that had to be rubbish. Denny wouldn’t listen. But he was bloody hungry. They’d eat the pasta, and then he’d put Kit out.

He couldn’t help but hear what Kit said as they dined. The elf claimed he’d materialized a month or so back in the bargain basement of a department store. He’d hidden out in a store room among leftover Christmas items, of which he’d grown fond.

“So lovely to know Christmas is still going on,” said Kit. “That’s the thing with moving on all the time; sometimes customs just vanish. I miss St. Bartholomew’s Fair, you know.”

Kit had grown so attached to the bright Christmas decorations that he’d wasted no time removing Denny’s tree from its box under the stairs to remind him of his most recent home. He’d remained in the store several weeks, chatting to staff and customers and reading his way through any books and newspapers he found lying about.

“Working out how the world works these days and what all the new words mean. Like how tablets aren’t pills anymore, but those shiny things with touch screens.”

Then his body grew solid enough to set off the alarms at night, and he’d had to leave. He’d spent his days and nights after that busking on the Underground network, as the great outdoors freaked him a bit at first.

“After last time I was in London,” explained Kit, “with all the bombs.”

“Right, that’s it.” Denny pushed his half-eaten meal away and got up. Swallowing a mouthful quickly, Kit rose too, turning to drop his plate in the sink behind him. Denny hurried about the table, grabbed him by the elbow, and spun him around. “Why do you keep going on about bombs?”

Kit furrowed his brow, and that strange look glazed his eyes, whispering of memories. Shouting of pain. “I was here in 1941.”

Denny shook him. “You’re telling me you were in London in the Blitz as well as in Shakespearean times? You must think I’m loopy.”

Kit drilled his gaze into him and fluttered his long lashes. “No. I think you’re horribly messy. Apart from your underwear drawer. You keep that neat enough.”

Denny froze. “You’ve been poking around my things?”

“I loved your things. They were beautiful.”

A hot flush spread from the base of Denny’s neck to his brow. The elf had been messing with his most intimate possessions.

Yet his humiliation burned out quickly. This elf had cut to the heart of his “disgusting habits,” and didn’t seem bothered at all.

The elf arched a brow, overtly flirtatious. “I hope you don’t mind. I, uh, tried some on.”

“Your lace thong.” Kit dropped his voice to a sexy growl. “I’m wearing it now.”

When she isn’t buried in books, she’s stewarding at a medieval house, or shouting at the world to get involved in awesome events celebrating all things historical.

She loves angst-filled romances, in which the heroes suffer a bit (sometimes a lot!) but they always get their happy ever afters.

Kay has kindly offered up an eBook copy of winner’s choice from her backlist!! The giveaway starts now and ends September 12, 2014 at 11:59 p.m. To enter, just click the link below!

Don’t forget to check out Nikyta’s review of Catching Kit to see what she thought of it! 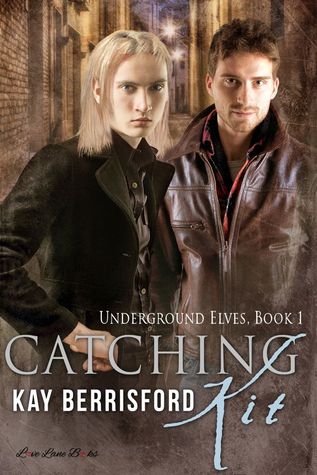 Blurb: Denny is a top secret agent on a mission to protect London from Ethereal Beings – elves – who are seen as dangerous mind-reading parasites who prey on human emotions.

Kit is an elf on the run, misunderstood and persecuted by humans. When Denny catches him, he shatters everything Denny’s been taught about elves. He’s gorgeous and funny and claims he’s been searching a long time for a guy like Denny. He shares Denny’s kinks and now he needs Denny’s love to survive.

But if Denny doesn’t take Kit to jail, he’s in big trouble. Dare Denny break the law and gamble his life to save the Ethereal Being in his bed?

Please note: This is a revised version of a previously released title.
END_OF_DOCUMENT_TOKEN_TO_BE_REPLACED

Pirates Week Review: The Merman and the Barbarian Pirate by Kay Berrisford 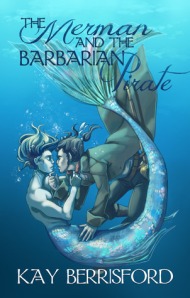 Blurb: Raef, a lonely merman, spends his days watching the dashing Lord Haverford from afar and dreaming of love. When Haverford is robbed by a pirate, Raef vows to reclaim the stolen goods, hoping his victory will buy him the happiness he yearns for with Haverford.

But Jon Kemp does not match what Raef knows about pirates, and the simple quest Raef anticipated turns out to be an epic journey. For while Jon might be a nobler man than Raef believed, he’s still a pirate. Love and loyalty are not on Jon’s agenda, and he certainly has no plans to love someone not entirely human …
END_OF_DOCUMENT_TOKEN_TO_BE_REPLACED