Posted on November 16, 2015 by thebloggergirls 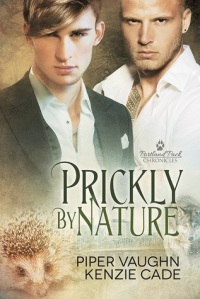 Blurb:  In the four months since hedgehog shifter Avery Babineaux started investigating the disappearance of a young female werewolf from the Portland Pack, he’s discovered his life’s passion. Now he’s apprenticing under established PI Corbin Reid. Avery hopes his training with Reid will help him finally bring Lacey home, but detective work isn’t without its perils, and the potential dangers strain his relationship with his new mate, Dylan.

Dylan Green would be perfectly content with his mating and his motorcycle shop if it wasn’t for his constant worry about Avery’s safety and the fact that Avery’s never home. Proud as he might be of Avery’s determination to prove his worth and fulfill his promise to Lacey’s father, Dylan can’t stand the thought of Avery being hurt. Yet what right does he have to demand Avery give up his job when it’s clear Avery’s found his true purpose? Still, Dylan wishes he could, and the appearance of a new police detective who sets his sights on Avery only adds to the tension.

Something has to give, but stubbornness runs in both their veins, and it might take a catastrophe for them to find a compromise they can live with.
END_OF_DOCUMENT_TOKEN_TO_BE_REPLACED

Blurb: Being left for dead sure has a way of changing a man.

All West wanted was one night of fun. He’d taken on the responsibility of raising his younger siblings after their parents died, had done so out of love, but he was a young man and he just wanted a chance to live like one for a few hours.

It almost cost him his life. It certainly meant his life was changed forever, and along with his life, the lives of his siblings. They were all exposed to a secret world they’d never known existed. Vampires.

Human children living alongside vampires…seemed unusual. Claude, the coven leader who saved West and his brothers and sisters, doesn’t have accommodations for kids. He finds one coven in the country that does, and sets about making a home there for West and his family. Before he sends West away, West meets an intriguing man, Axel, whom he encounters again months later. The attraction between them is strong, but there is more to consider than just how sexy Axel is.

Nothing in life is easy, whether you’re a vampire or a human.