Posted on October 31, 2017 by thebloggergirls

He Was Never Supposed to Stick…

There are your plans…

And then there are your characters’ plans.

Rinda Elliott and I are plotters. We have to be with two people working on the same book. No plot outline means lots of chaos. We are both writing at the same time, and we must have a solid idea of what the other is planning, where she is going.

Of course, it’s not planned to death. There’s room for improvising, changes, or going completely off the rails if a really good idea strikes.

In short, you leave room for the magic that you can’t plan for.

And Geoffrey Ralse was pure magic.

His first appearance was in a scene in Shiver, book one of the Unbreakable Bonds series. We first see him drunk and crawling all over the gruff and grumpy Dr. Ashton “Snow” Frost. He was supposed to be one of those one-off, adorable and funny characters that enhances a scene but is ultimately forgotten.

But Geoffrey was never forgotten.

When readers took a chance on Shiver, they asked if they’d seen more of Geoffrey. Rinda and I were also asking if we’d see more of Geoffrey. He was flirty and sassy and so much fun to write. We could feel his hidden depths and wanted to explore them.

As before, Geoffrey shined.

He appeared again in Torch, book 3, and had some touching words to add in Devour, book 4, when we closed out the series.

Of course, by the end of Torch, Rinda and I had started to scheme a new future for Geoffrey, where he would get his own book, his own adventure, and his own happily ever after. He’s a great, dynamic character. He’s not at all what we expected when we first introduced this sexy club kid in Shiver, but we fell in love.

Psycho Romeo with Geoffrey and Sven was amazing fun to write. It was like watching one of your children grow up over the years and finally achieve the happiness that you always hoped they would find.

We hope that you love Geoffrey too. END_OF_DOCUMENT_TOKEN_TO_BE_REPLACED 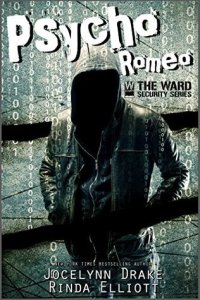 Blurb: Geoffrey Ralse is known for being the life of the party. He loves the club scene, hanging with his friends, and flirting with whomever catches his eye. He certainly isn’t going to stop living his life just because some would-be stalker starts sending him threats.

But it all changes when Geoffrey is drugged and wakes up half naked in his own home with a new message from his stalker.

He needs help and there’s only one person he trusts…

Protective Agent Sven Larsen has been fighting Geoffrey’s flirtatious advances for months, even though he’s impossibly drawn to the man. There’s no way he can be around him twenty-four/seven and not finally crack. But one look at Geoffrey’s haunted eyes, and he knows there’s no way he’s letting Geoffrey walk out of Ward Security without him.

Even if it means breaking his own rules, he will keep Geoffrey safe.

Trigger warning: There is a very short section with sexual assault that some could find upsetting.
END_OF_DOCUMENT_TOKEN_TO_BE_REPLACED