Posted on September 1, 2014 by thebloggergirls 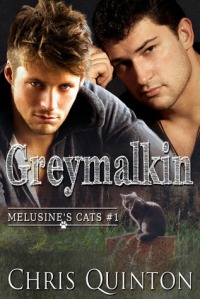 Blurb: The mutual attraction between Jesse and Will is a bonus for Melusine when her enemies close in and she needs to rebuild her war band—starting with Jesse, Will, and Greymalkin.

Jesse Adams is an ex-rugby player who’s gone into seclusion to avoid the media following a guilty verdict in a court case. Jesse has come to live for a year in Greenlynn, where he is supposed to be writing his biography.

Will Blake is an out and proud policeman, respected and liked by the community he helps to protect from rural crime.

When the two men meet their attraction is instant, but they have no idea their love will draw them into a centuries’ old conflict.

Melusine, a deity of rivers and seas, long ago lost the Battle of the Betrayal and is imprisoned in a nexus centered on the source of the Lynn River. She can only travel in the flowing water of her river, and cannot set foot on her banks. Her cats are not so bound. Neither pets nor familiars, they move freely between the realities, her agents among the humans who live along the Lynn.
END_OF_DOCUMENT_TOKEN_TO_BE_REPLACED