Posted on September 23, 2014 by thebloggergirls

Hey, guys! As you all know, a while back Tuesday was designated as the official “Teaser” day in Romancelandia. Every week authors post excerpts from their works in progress or upcoming releases, and that’s exactly what I’m here to do today. Thanks to The Blogger Girls for having me over and giving me a platform to talk a bit about my newest book.

I am a fierce supporter of civil rights. I’m an even fiercer supporter of LGBTQ rights. I was born and raised in a beautiful island were people are friendly, family oriented, extremely lovable, and, yes, mostly Catholic. Our culture is rich. The folklore, the food, the music… all of it is spicy, tasty, and ingrained.  Sadly, we also have our negative side.

You know what else is ingrained in Puerto Rico? Machismo. Chauvinism too, but not to the same level, thank God. The majority of our men are hard workers and fiercely protective of their families. They are raised to get married and be the breadwinners in their homes, and they take that responsibility seriously. They become “men” at an early age, and husbands and fathers in their teens and early twenties. That’s the norm. It’s our way.

Another thing that’s ingrained in Puerto Rico is religion. Now, I don’t have to tell you religious people aren’t exactly jumping on the equality bandwagon, do I? Down there men act like men. Anything different and there could be hell to pay. So, what’s a Catholic boy to do when he realizes he likes other boys and his church tells him acting on his attraction is a mortal sin? And what about a boy who’s a nurturer, likes pretty things, and wants nothing more than to take care of the boy he likes? How do they go through life repressing their true selves for fear of losing everything they hold dear if someone found out they’re gay?

Growing up in Puerto Rico in the 80s with a gay best friend allowed me to gain almost firsthand experience in discrimination, mockery, bullying, and downright abuse. I saw my friend go through things other people can’t even fathom, and I haven’t been able to forget.

Caribbean Tales, my new(est) series, aims to explore the life journey of my Puerto Rican characters in a country closed-off to their orientation. All the stories are on the island, but they’re standalones. Heavy Hitters is the first title in the series, and it spans a lifetime. You’ll meet Santi and Luca when they are kids, and follow them through the years until they reach their thirties and find their happily ever after.

Once again, thanks to The Blogger Girls for having me. The book doesn’t come out until October, but I’d like to do a giveaway anyway. Share your experiences and observations about acceptance (or lack thereof) toward the LGBTQ community in your neck of the wood for a chance to win a copy of Heavy Hitters. I’m looking forward to hearing from all of you.

And now I leave you with an excerpt from Heavy Hitters 🙂 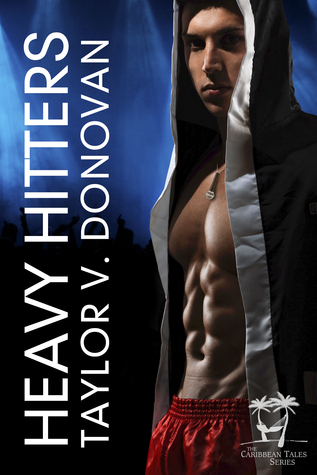 His toughest opponent is himself.

World Boxing Champion Santino Malavé has been fighting since he was a kid. Poverty, domestic violence, and emotional abuse were early contenders. Guilt and self-loathing were beaten into him by his homophobic dad at an impressionable age and now machismo, an integral part of the Latino culture, rules his life. In the ring he’s undefeated. Outside the ropes life constantly hits him below the belt. It takes a sucker punch from his best friend to finally knock the denial out of him and force him to face his true nature like a real man.

A natural born entertainer, Luca Betancur has grown up laughing, performing, and celebrating life among his tight-knit family under the scorching Puerto Rican sun. He has also dedicated years to deny his sexuality, study what the Bible really says, and pursue fame. Singing the wrong note on stage is not a mistake the multi-platinum award-winning singer would ever allow. Falling in love with a man is not a transgression his devout family would ever accept. The ties that bind him are strong, but the pull toward his childhood best friend may just be enough to tear it all to shreds.

Anger, mistakes, bigotry, and the need to conform put up a good fight. Can they break down the walls erected by Catholic teachings and a chauvinistic society, or will their relationship lose by technical knockout?

An Excerpt from Heavy Hitters

The soft light of Luca’s bedside lamp illuminated the room. The mattress shifted when Santi plonked down next to him. They weren’t touching, but Luca held his breath. Santi’s scent always went to his head.

He buried his face in the pillow, then slipped his hand between his body and the mattress and wrapped his fingers around his cock, praying Santi wouldn’t notice he was hard.

Being the same age, they both had to deal with untimely erections neither of them ever mentioned, but this wasn’t just a case of morning wood. He wasn’t awake enough to pretend that it was as simple as that. He was afraid Santi would put two and two together if he saw the guilt and shame Luca felt reflected in his face.

“I know the submission deadline is approaching, but the song isn’t ready yet. Hundreds— maybe thousands of experienced lyricists will enter their songs into this contest, and I’m just a sixteen-year-old music student. I’ve got to make sure my song is great.” He traced the blue stripes of his bed sheet with his fingertip, swallowed his self-consciousness, and looked into black, soulful eyes. “I think I captured the true spirit of Puerto Rican culture and folklore. I like the lyrics a lot, and Mateo helped me with the beat, so I know it’s sick. Plus you’ve told me it’s a great song, and you’d never blow smoke up my ass.”

Santi licked his lips and gave him a once over. “So what’s holding you back?” He blinked quickly, folding his arms over his chest.

Jesus, what was that about?

Taking a shuddering breath, Luca lowered his gaze and willed himself to calm down.

It made him forget his religious faith. It made him painfully aware of the desires he worked so hard to ignore. That was something he couldn’t allow. He couldn’t go against God and lose his soul.

He wasn’t checking you out. He didn’t look at you like he wanted to kiss you. It was your imagination. You know he’d never want something like that and you must remember the heart is more deceitful than all else. Jeremiah 17:9 says so, and the Bible is always right.

“This is the opportunity of a lifetime,” he said out loud, blocking completely impure—not to mention impossible—images of Santi climbing on top of him. “I mean, Desiree Coll will include the winning song in her next album, and everything she sings climbs to the top of the charts. The contest is getting media attention. The music industry will notice the song. It could even win a Grammy or something like that. Do you know how amazing that’d be for my future singing career?” END_OF_DOCUMENT_TOKEN_TO_BE_REPLACED