Posted on June 7, 2019 by thebloggergirls

Layton Foxx works hard for what he has. The condo, the career, the chance to make his mark, is all down to the sacrifices he has made. With tragedy in his past, he doesn’t want or need love. Then he meets Adler Lockhart, the extroverted, sexy winger for the Harrisburg Railers and abruptly he can’t avoid love even if he wanted to.

Adler Lockhart has had everything handed to him his whole life. Cars, villas, cash, college tuition at the finest Ivy League schools. The only things he doesn’t have are parents who care or the love of a good man. Then Layton walks into his privileged life and shows him what real love can be like.

USA Today bestselling author RJ Scott writes stories with a heart of romance, a troubled road to reach happiness, and most importantly, a happily ever after.

END_OF_DOCUMENT_TOKEN_TO_BE_REPLACED 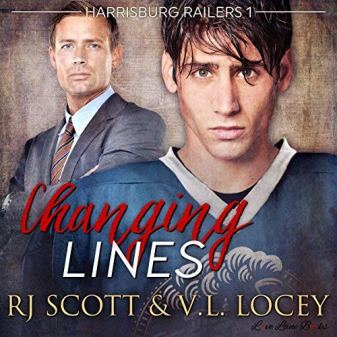 Blurb: Can Tennant show Jared that age is just a number and that love is all that matters?

The Rowe brothers are famous hockey hotshots, but as the youngest of the trio, Tennant has always had to play against his brothers’ reputations. To get out of their shadows, and against their advice, he accepts a trade to the Harrisburg Railers, where he runs into Jared Madsen. Mads is an old family friend and his brother’s one-time teammate. Mads is Tennant’s new coach. And Mads is the sexiest thing on which he’s ever laid eyes.

Jared Madsen’s hockey career was cut short by a fault in his heart, but coaching keeps him close to the game. When Ten is traded to the team, his carefully organized world is thrown into chaos. Nine years his junior and his best friend’s brother, he knows Ten is strictly off-limits, but as soon as he sees Ten’s moves, on and off the ice, he knows his heart could get him into trouble again. END_OF_DOCUMENT_TOKEN_TO_BE_REPLACED

Posted on August 8, 2018 by thebloggergirls

Fear and sadness mark Bryan’s life, can Gatlin show him that you have to trust before you can love?

Gatlin Pearce is creeping up on thirty-eight and is still single. It’s not that he wants to be alone, it’s just that he’s too damn old to be in clubs filled with glittery gay boys who can’t even tell him who the Rolling Stones are.

Better to just spend his evenings at Hard Score Ink – his tattoo and artwork shop – creating masterpieces on human flesh, listening to the Railers games, and nursing a cold beer.

His solitary life is about to end when Bryan Delaney, the new Railers backup goalie, shows up at his shop looking for new artwork for his helmet. There’s some sort of sad story in those beautiful eyes of Bryan’s, and Gatlin finds himself more than a little infatuated with the tender new goalie.

Bryan Delaney leaves home at fifteen to live with a billet family. He just wishes that he could have escaped his alcoholic father and strictly devout mother earlier. Drafted to the Arizona Raptors he finds a new family, and his first love affair even if that relationship is marked with violence.

Being traded to the Railers is a shock to the system but the team isn’t like any other he’s ever played on and they truly seem to care about him. It’s only when he meets artist Gatlin, with their shared love of music and hockey, that he realizes how hard it is to escape the past.

END_OF_DOCUMENT_TOKEN_TO_BE_REPLACED

Two men afraid to feel, have to make choices that could end up breaking down their defenses and leading them back to love.

Every time Max Van Hellren steps on the ice he knows it could be his last time. At thirty he’s past his hockey prime but he’s also hiding a life-threatening injury that private doctors warn could kill him. This is his last season, and there’s a chance he could lift the Stanley Cup after fourteen years in the NHL. He just needs to stay safe and healthy; difficult when he’s known for his heavy hitting and with a propensity for dropping the gloves and putting his body in the way of pucks to keep his team safe.

A one night stand with a sexy man was just what he needed, dangerous and hot, but what if it turned into more? Would he actually have to share the secrets he so desperately tries to hide?

Ben Worthington had it all. A fulfilling job running the CrossRoads Shelter, his loving aunts, and a husband that understood his devotion to animals. Then, the love of his life left him, succumbing so quickly to an unexpected sickness that Ben never had time to say goodbye. The violent loss scarred him.

Unable to move past his fears, he moves from lonely encounter to lonely encounter, slaking a desperate need that is eating away at him, but never making a connection that could lead him back into love. One night with Max makes him want more, but will giving into the temptation open the door to feelings he can’t contain?

Can these two broken men ever find a way to be together?