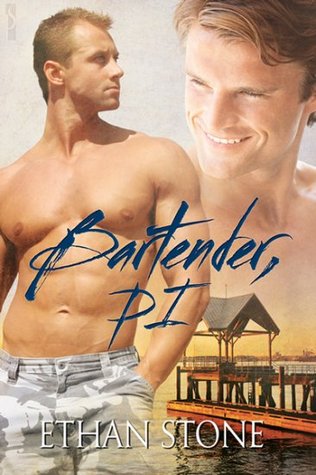 Blurb: When hockey star Linc Carpenter is banned from playing his beloved sport, he starts over in Tampa. Master of the mixed metaphor, Linc knows he’s not the sharpest tool in the shed. He’s a lousy bartender, but doesn’t know what else to do until he gets a shot at being a private investigator. If he can prove that wealthy fashion designer Quentin Faulkner is cheating on his wife, this case will earn him big money. Faulkner’s bodyguard, Brady Williams, proves to be the biggest hindrance to completing his assignment, other than his own ineptitude. Linc is shocked when Brady admits to being attracted to him. He’s even more shocked when Brady turns down immediate sex because he’s looking for so much more. Will their new relationship survive the dangers of this case?

This was such a fun story.  I mean, laugh out loud, light hearted fun.

Poor Linc is forced to leave hockey, the only thing he has ever really done.  He isn’t the sharpest tool in the shed, and his word mix-ups had me chuckling out loud throughout the entire story.  Really, they never got old.  He ends up with a job bartending for his friend but jumps on the chance to be a private eye when he learns that same friend does it on the side.  He takes on a big client willing to pay for Linc to get proof her husband is cheating.  I can’t even recall how many plans Linc went through attempting to gain said proof, but bodyguard Brady was there to thwart him every step of the way.  It becomes quite the game.

Brady is super sexy, ex-military bodyguard, though not the type Linc usually goes for.  But, Linc cannot deny the chemistry between them, even if he doesn’t understand Brady’s wanting to take things slow.  Brady is so patient with Linc, and I just really liked them as a couple from the start.

This was such an enjoyable read, with little to no sex, and even that doesn’t happen until the very end.  But, honestly?  I didn’t miss it one bit.  There is enough humor and action to keep things interesting.  Nothing goes right with Linc’s case, and eventually he joins forces with Brady.  Things twist and turn right up until the end when the big reveal explains all.  I was really glad I had the push to move this one up my list.  If you’re looking for something fun, light, sexy and sweet, be sure to give this one a try.

*I purchased my own, personal copy of this book to review.*