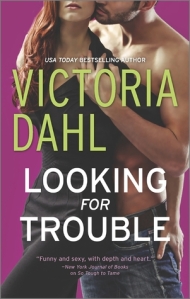 Blurb:  A good reason to be bad…

Librarian Sophie Heyer has walked the straight and narrow her entire life to avoid paying for her mother’s mistakes. But in tiny Jackson Hole, Wyoming, juicy gossip just doesn’t go away, so the last thing she needs is for history to repeat itself. Falling hard for the sexiest biker who’s ever rode into town would undo everything she’s worked for. And to add insult to injury, the sexy stranger is none other than Alex Bishop–the son of the man her mother abandoned Sophie’s family for. He may be temptation on wheels, but Sophie’s not looking for trouble!

Maybe Sophie’s buttoned-up facade fools some, but Alex knows a naughty smile when he sees one. Despite their parents’ checkered pasts, he’s willing to take some risks to find out the truth about the town librarian. He figures a little fling might be just the ticket to get his mind off of family drama. But what he finds underneath Sophie’s prim demeanor might change his world in ways he never expected.

Let me start with the good things first. The family drama is actually quite captivating, if you take it like a huge soap-opera kind of plot that is! I know that the drama is quite heavy and CRAZY, but somehow, I just can’t stop myself from reading it. I can’t turn my eyes from my Kindle as it unravels.

See, twenty five years ago, Alex’s father ran away with Sophie’s mom, and years later, Alex’s older brother found out that they both were actually dead because of an accident. Ever since her husband went missing, Alex’s mother was going downhill. She is said to be better, but the fact that Sophie grows up looking like her mother, makes Alex’s mother adamant to ruin Sophie’s life. She is horrible to her, calling her names, practically bullying her. It is completely one insane drama, but like I said, I just can’t stop reading it. It is a wreck but one that somehow makes me keep turning the pages to see what other mad things will happen (oh, and they do happen!)

Another thing that I love is Sophie’s relationship with her father. I love Sophie’s father –yes, he has been hurt because of the scandal as well, but he stays positive for his children. I love those moments of the two of them together, and Sophie’s father encouraging his daughter to reach her dreams. He’s really such a good guy.

First, I’m NOT buying Alex and Sophie’s romance. Lust, maybe, because they seem to connect only through sex, sex and sex. But outside of that, I find it hard to believe. On top of that, I totally don’t understand Sophie’s need to be a bad girl, or her need for rough sex, or even being called “whore” during sex. Why is that? For someone who is trying so hard NOT to be reminded of her mother, it’s totally out of character for Sophie. Nope, don’t understand.

Second, while I slightly understand that Alex is fed up with his mother and prefers to stay away, I find that his anger towards his older brother, Shane, who chose to stay home and take care of their mother, to be, well, ANNOYING. I’m sorry, Alex, but there is clearly something mentally WRONG with your mother and your way to deal with it is to blame her AND thinking that Shane betrays you? What is WRONG with you, Alex??! Then, instead of apologizing to Shane, Alex actually says “We were scared, and I reacted with anger and frustration, and you tried to fix it with hope. Neither of us was wrong. I’m sorry it took me so long to forgive you.” Well, excuse me, if I was Shane, I would say this “F*ck you Alex, for being all mighty, where were you when I was busy taking care of OUR mom? I’m only a year older than you are, you ungrateful brother.” Yep, that is what I will say to Alex. Shane is just way too patient.

Third, Alex’s mother’s mental health seems to be glossed over in quick explanation. It feels like the author is trying to make readers sympathize for the mother’s bitchiness and her spiraling down the black hole of depression and insanity. I don’t like it – it’s too much of an easy way out.

And fourth, the ending … man, what kind of ending is that? I can take HFN, but this feels totally rushed, without even a real promise of HFN. I mean, I like my HFN to have better closure as well.

Oh, and I also feel like this is not a start of a series but more like, a middle one? Like there are things that happened before Chapter 1 that I don’t know about. I only later found out that there’s a short story that precedes this one, so that might be the reason.

So, it’s pretty good and fast-paced for a contemporary romance, the mad drama sure kept me intrigued. However, at the same time, it is not completely satisfying for my personal reading experience.