Posted on August 18, 2014 by thebloggergirls

An Excerpt from Dangerous Wish

By the time the taxi had arrived and taken them back to his place, Dan’s buzz had been severely damaged. His nervousness at what he was about to do had wormed its way in and taken over. Insecurity was a bitch.

He wiped his sweaty palms on his jeans then took out his wallet to pay for the cab. Jared tried to hand him a ten dollar bill and Dan waved it away.

Jared pouted. “I want to pay my half.”

He’d said it in a playful way—the same teasing way that had kept Dan in an almost constant state of arousal all evening. Tucking his anxiety away for later, he kept his focus on the sweet gem sitting next to him.

In a move that he was sure surprised him more than Jared, he gave Jared a quick kiss on the lips. He shifted away quickly, not wanting Jared to see any conflict, not wanting him to guess just how inexperienced he really was as a lover. He needed the night to be perfect.

After exiting the car, they walked hand in hand down the short pathway that led to Dan’s apartment. It was really a fourplex, the units all lined up in a row, Dan’s on the far right. Stopping when they reached the entrance of his place, Dan fumbled at the door with his key, Jared behind him, wrapping his arms around Dan and nibbling at his earlobe. Jared made soft cooing noises and there was a gentle press against Dan’s ass, the feel of Jared’s hard shaft.

He wanted inside. Inside the apartment, inside of Jared. He’d dreamt of the moment when he would first fuck a guy for so long that it didn’t seem real that it was about to finally happen. The lock eventually cooperated—or maybe it was his fingers—but he was able to get them into the house, Jared still clinging to him, Dan stumbling and laughing.

As soon as the door had shut behind them, Dan twisted in Jared’s arms and their lips mashed together, tongues frantic and searching. There was no attempt made to be tender or loving – he was nothing but urgent need. They grasped and clung to one another, Dan gripping Jared’s hip with one hand. He used the other to do what he’d been desperate to do all evening—he twined his fingers in Jared’s thick, soft hair, reveling in the silken feel against his skin.

Fact #1 – EMT Jared Li is well respected as an outstanding medic amongst his peers in Mesa, Arizona. 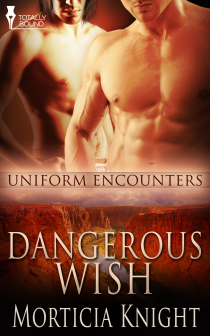 Love is a dangerous emotion that EMT Jared won’t risk. But it looks as though a sweet and sexy National Guardsman is about to make him wish for that—and much more.

EMT Jared Li loves his job, his friends and clubbing. There’s nothing like a night of fun getting glammed up, throwing on some heels and shaking his ass to the latest Britney tune. Life is all about having a good time with as many hot guys as possible.

Dan Harrison has been in the National Guard for about six months and out for not much longer than that. At twenty-two, he’s somewhat innocent, a little shy and not interested in meaningless hook-ups. One night at a karaoke bar changes everything for him when his fellow Guardsman Joseph introduces him to his friend Jared. Dan’s never met anyone like the luscious twink who’s filled with so much life and laughter.

A night of passion shakes them to their very cores. Jared really likes Dan, but doesn’t want to get caught up in any type of exclusive thing. Dan wishes there could be more between them, but is willing just to be friends in order to remain near the androgynous stunner.

Hanging out strictly as friends proves to be almost impossible for them both. Not only does Jared continuously lust after the muscular soldier, but he’s also falling for the caring and compassionate man. Dan’s every sex fantasy stars Jared in one of his daring club outfits, but his heart is what really matters and it’s already been lost to Jared.

A traumatic event breaks down the barriers between them and gives them the chance to be together the way they both want. But after Dan is called up by the Guard to assist at a natural disaster, the same bravery that Jared admires in Dan might be the final thing that separates them forever.

When not indulging in her obsession for books, she loves the outdoors, film and music. The Pacific Northwest is the ideal spot to enjoy both hiking and beachcombing. Once upon a time she was the singer in an indie rock band that toured the West Coast and charted on U.S. college radio. She now resides on the northern coast of Oregon, where the constant rain and fog remind her of visits to family in England and Scotland when she was a child.

In this blog tour, Morticia Knight is giving away a a signed paperback copy of Dangerous Wish! To enter, just click the link below!