Posted on September 19, 2014 by thebloggergirls

Thank you to Blogger Girls for hosting me today!

Getting to Chicago involves a 10 hour flight. Ten hours of sitting in the same place *boring*. I can’t sleep on planes, and there is a long gap to be filled between meals! I try reading, and I even had the cool thought I could write, but it just didn’t happen.

One thing that helped was the films on the small video player. Lots to choose from and at last I could start watching films that were on my *can I be bothered* list, and then stop them ten minutes in if I didn’t like them. Silver Linings Playbook was one of those films. It also meant I could re-watch films and fast forward them to the good bits. All the Chris Evans parts in Captain America, all the Chris Evans parts in Avengers Assemble (are you sensing a theme here?).

One thing I can’t bear to do is to give up on books. I think that if I am drawn to start a book, then I owe it to the author to finish it. Some books throw you into a story and you are gripped from page one, others are a slower burn. Some start with an established couple, some have the heroes not meeting until a third of the way in. Some are insta-love, some have love not even being mentioned until the last chapter. I want to give the author a chance to pull me in and I love the moment where the hook grabs me and hauls me in. I have only DNF’d (Did Not Finish) a handful of books.

Do you do that with books? How long do you give a book before it becomes a DNF. Do you give up on a books? Or, on the other hand do you have books you revisit and you know exactly where your favorite scenes are?

About A Reason To Stay 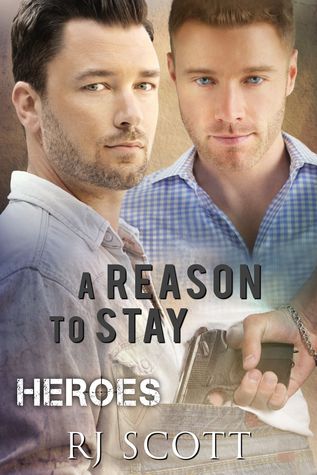 When SEAL, Viktor Zavodny, left small town America for the Navy he made sure he never had a reason to return for anything other than visiting family. He wanted to see the world and fight for his country and nothing, or no one, was getting in his way. He fights hard, and plays harder, and a succession of men and women share his bed.

But a phone call from his sister has him using his thirty day down time to go home instead of enjoying his usual thirty nights of random sex and sleep.

What he finds is a mystery on the Green Mountains and the only man attempting to make sense of seemingly unrelated deaths. His childhood friend and first love… Lieutenant Aiden Coleman, Sheriff.

There were reasons Viktor left his home. Not least Aiden Coleman with his small town innocence and his dreams of forever. Now Adam and Viktor need to work together to save lives and prove there is a hero in all of us.

When it’s done, if they make it out alive, can Aiden persuade Viktor that he has a reason to stay? Maybe forever?

An Excerpt from A Reason To Stay

He scooted up so he was sitting on the pillows and watched, amused at the fact that the husband and wife team he had joined in with last night were getting hot and heavy right in front of him. She held out her hand, Anna or something. Viktor waved her away, and dismissing the need for a shower, he dressed and left the room.

“See you around, soldier!” the husband, Mark, shouted after him as he left the suburban middle-class home in Suffolk, Virginia.

“Sailor,” Viktor muttered. Then he pulled the front door shut and climbed into his Tahoe. The couple hadn’t been all that bright, but the husband was built just right for Viktor to get a hold of. Clearly they didn’t understand Viktor’s explanation of who he was when he was attempting to get the three-way. Typical.

He dialed his sister’s phone, and she picked up almost immediately.

“Viktor,” she stammered. Instantly Viktor was on high alert. He forced aside all possible worries and simply listened. “Ben had an accident, he’s in the hospital.”

“No. He was out on the mountain, found this morning. He’s unconscious, and he has a broken ankle, hypothermia, and a head injury.” She caught a sob. “What do I do? Why would he be out there?”

Viktor turned the key in the ignition and said nothing. On the mountain? That didn’t make sense.

“I’ll be there as soon as I can,” he said firmly. “Call me if anything changes.”

He didn’t want details. He just needed to get there.

RJ Scott has been writing since age six, when she was made to stay in at lunchtime for an infraction involving cookies. She was told to write a story and two sides of paper about a trapped princess later, a lover of writing was born.

As an avid reader herself, she can be found reading anything from thrillers to sci-fi to horror. However, her first real true love will always be the world of romance where she takes cowboys, bodyguards, firemen and billionaires (to name a few) and writes dramatic and romantic stories of love and passion between these men.

With over sixty titles to her name and counting, she is the author of the award winning book, The Christmas Throwaway.  She is also known for the Texas series charting the lives of Riley and Jack, and the Sanctuary series following the work of the Sanctuary Foundation and the people it protects.

Her goal is to write stories with a heart of romance, a troubled road to reach happiness, and most importantly, that hint of a happily ever after.

As part of her GRL stop, RJ is offering up a chance to win a $10 gift card to either Amazon or All Romance eBooks! To enter, just click the link below!