Book Review: Protector of the Alpha by Parker Williams 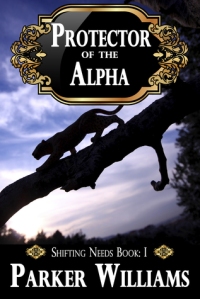 Blurb: Adopted at an early age by a wealthy family, Jake Davis has always seemed to have an easy life. Even in college he was blessed with good grades and an apparently clear path to a pro football career. Good thing his best friend keeps hanging around to keep his head from getting too swollen.

Zakiya Incekara has always been…odd. Being fluent in six languages and having a flair for international cooking should open the world to him, but those skills leave him isolated.

When Jake sees Zak for the first time, with water beading down his slender form, something inside him shifts, and it hungers for Zak. To have him. To claim him. And Jake knows that whatever it is, it won’t be denied.

When they are approached by a man who claims knowledge of a secret past they share, Jake and Zak are thrust into a world they would never have believed existed. The forests of Alaska might seem an odd place to find your destiny, but these men will meet the challenges head on, as they learn that sometimes you have to make sacrifices to be Protector of the Alpha.

Jake Davis has everything going for him. Star athlete on the football team, a great best friend, parents who love him and no need to worry about money. But when he discovers an alluring scent, everything is about to change. Meeting Zakiya Incekara jumps starts something in Jake he doesn’t understand and before he knows it, he’s no longer on the football team, his parents are missing and even he admits he’s acting strange. But even with all that, he can’t help but be drawn to Zak. And when Zak and Jake learn why Jake is changing, they’re swept into a world where anything is possible and everything is dangerous.

Right from the start I was drawn into this book. I loved that while shifters were a secret, they still merged with humans and had the Protector/Alpha duo. It was interesting to learn about the world and to see the power dynamics between the humans and shifters. As characters, I adored both Jake and Zak. Jake might be a jock but he’s also sweet and caring and once he sees Zak, he’s way beyond possessive. Zak, on the other hand, is more stiff and cold compared to Jake. He’s very formal when it comes to addressing things and VERY demanding to the point that he represents the ‘alpha’ amazingly well… except when they’re in bed where Jake takes over 😛

I really enjoyed this one but my biggest issue was that the ending and the overall Alaska experience was so rushed. I wanted to explore more of their people and especially Jake’s nature but also to experience more of Jake and Zak in their destined roles. Other than that, I found the prologue to be a little… unnecessary. IMO, it didn’t really play a part in the overall story and, ironically, had me constantly wondering if the ‘twins’ mentioned at the end of the prologue were somehow Jake and Zak. They aren’t but that didn’t stop me from constantly trying to understand how the man from the prologue was connected to the overall story LOL.

All in all, this was a great shifter story. I loved seeing the slow but fast development between Jake and Zak. Fast because their instincts are forcing them together but also slow because they didn’t want to rush anything. I adored both Jake and Zak and even loved Casey, Jake’s best friend. I’m hoping his book is next because I can’t wait to see where things go from here!