Posted on December 17, 2014 by thebloggergirls

There is so much that parents try to hide from their children.

Without meaning to, parents very often create an alternative version of reality for their children, a sort of box around the household, creating a place in which their rule is right their version of the family is the only one.  It’s only natural—parenting is terrifying. When the short people start asking “Why? Why? Why?” or “How about this? Or this? Or this?”  Parents know their world is flawed, they know they make mistakes, but God, isn’t their job harder if kids argue back with every frickin’ thing?  Nope, nope nope… better to create a world in which the child is protected, and reality is single faceted, and nobody knows the truth, because the truth is a little bit scary.

So if parents are good at creating this world, grandparents are superb at it. When I was growing up, there were lots of things I didn’t recognize about my grandparents’ relationship that a more adult me can see.  Grandpa could be mean, and Grandma could be manipulative. Grandma once told me that Grandpa was called into service for Korea after he’d settled down and started to raise a family. She said that when he came back, he wasn’t the same man.

My aunts and uncle spoke vaguely at Grandma’s funeral of her long suffering patience, and the things she sacrificed to keep the family together, and to give the kids the best parts of their father.

I can write the story here in the subtext—but the little girl who thought their home was beautiful and they were gods doesn’t want to.

In The Bells of Times Square, Nate is at the end of his life, and a stroke has rendered him without speech. He is left with the story of him and his first lover locked in his heart—his family will never know.  He’s left them with clues, but vague ones, leaving us to wonder—will his family be able to read the subtext? Will his grandson be able to guess? Will he be able to fill in the blanks and write the story?

Or will he remain willfully blind to anything that will paint his beloved grandfather as not the god he’s loved all his life?  Will he be able to look at the secret story and see that even the flaws, the human parts, make his grandfather a better man?

My grandparents aren’t different people for my perception that they were human.  And perhaps growing up is recognizing that all of the grownups we knew as children were just as lost as we are.

Maybe that’s the ultimate comfort.  Not that the people who raised us were perfect, but that they weren’t. Maybe that belief is what will allow us to take risks and break out of the box of perfection we were led to believe existed.  Maybe we can build a better box if we break those perceptions.

But then, each family’s box is different.  Nate’s grandson’s decision was his own to make.  And so was mine.  And the beauty of a story is that you get to take the pieces of the story made just for you and use them to build your own box.

May yours be the best, most truthful box you can afford.

About The Bells of Times Square 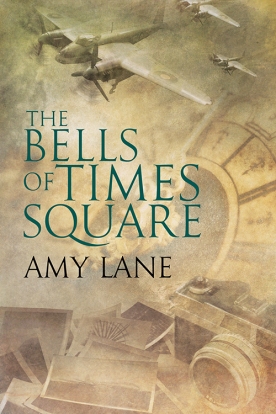 Every New Year’s Eve since 1946, Nate Meyer has ventured alone to Times Square to listen for the ghostly church bells he and his long-lost wartime lover vowed to hear together. This year, however, his grandson Blaine is pushing Nate through the Manhattan streets, revealing his secrets to his silent, stroke-stricken grandfather.

When Blaine introduces his boyfriend to his beloved grandfather, he has no idea that Nate holds a similar secret. As they endure the chilly death of the old year, Nate is drawn back in memory to a much earlier time . . . and to Walter.

Long before, in a peace carefully crafted in the heart of wartime tumult, Nate and Walter forged a loving home in the midst of violence and chaos. But nothing in war is permanent, and now all Nate has is memories of a man his family never knew existed. And a hope that he’ll finally hear the church bells that will unite everybody—including the lovers who hid the best and most sacred parts of their hearts.

Amy Lane exists happily with her noisy family in a crumbling suburban crapmansion, and equally happily with the surprisingly demanding voices who live in her head.

She can be found at her computer, dodging housework, or simultaneously reading, watching television, and knitting, because she likes to freak people out by proving it can be done.

Hi, and welcome to the blog tour for The Bells of Times Square!  This book is close to my heart– if you read the extra front and back matter in the story, you will see that I drew inspiration from my grandparents and their roles in WWII.  There was a lot of research involved here and also an unusual romance.  I hope you enjoy this stop on the tour, and don’t forget to enter the Rafflecopter below for the giveaway of a $10 gift certificate to Riptide Publishing and a signed copy of The Bells of Times Square!  Feel free to comment, or to contact me at any of my links below–I’d love to hear from you!