Posted on December 23, 2014 by thebloggergirls 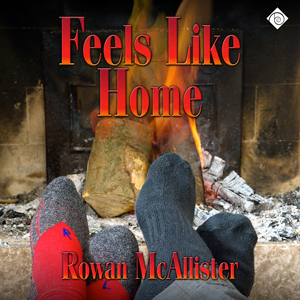 Blurb: It’s only three days ’til Christmas. Jeremy Porter is still grieving over his mother’s death, and Paul McClellan is a lonely divorcee just trying to make it home even though the only one waiting for him is his cat. It may seem like a miserable combination, but when Jeremy saves Paul from being hit by a car during a nasty snowstorm, their connection and chemistry are undeniable. It’s easy to cuddle up with a stranger when you’re snowed in but can a holiday affair turn into more if being together feels like home?

Review and Audio: Jeremy is sad this Christmas because it’s his first without his mother, who was a friend too. He ends up helping Paul by saving him from being run over, then gives him shelter during the storm. They end up celebrating a “pre-Christmas” and making good use of the time by learning about each other both emotionally and physically.

They discover they have a pretty intense connection and when the snow clears they decide to make a go of a relationship, even though it might take some extra work.

I enjoyed the emotion and the smexy times in this story and felt that, by the end, the couple had a good chance of making it go. Since it is a short-story, we didn’t get a lot of time to get to know them, but what we did see looks promising.

Michael Stellman did a nice job with the narration, letting the story tell itself with a style that is easy to listen to.