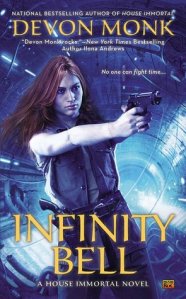 Blurb:  Return to national bestselling author Devon Monk’s heart-pounding House Immortal series, where eleven powerful Houses control the world and all its resources. But now, the treaty between them has been broken, and no one—not even the immortal galvanized—is safe….
Matilda Case isn’t normal. Normal people aren’t stitched together, inhumanly strong, and ageless, as she and the other galvanized are. Normal people’s bodies don’t hold the secret to immortality—something the powerful Houses will kill to possess. And normal people don’t know that they’re going to die in a few days.

Matilda’s fight to protect the people she loves triggered a chaotic war between the Houses and shattered the world’s peace. On the run, she must find a way to stop the repeat of the ancient time experiment that gifted her and the other galvanized with immortality. Because this time, it will destroy her and everything she holds dear.

Caught in a cat-and-mouse game of lies, betrayal, and unseen foes, Matilda must fight to save the world from utter destruction. But time itself is her enemy, and every second brings her one step closer to disaster….

Review: Infinity Bell is the second novel in Devon Monk’s House Immortal trilogy. Immediately, the story opens from where we left off — as Matilda Case, her brother Quentin, another galvanized Abraham (who is badly wounded), and Neds are running from killer assassins sent by the leader of Houses. Not only are they running for their lives, they are also running out of time. As readers learned from the first book, an experiment called the Wings of Mercury that was set-off by Case’s great-great-great grandfather three hundred years ago, had broken time. As time mended, in just few days, all the galvanized (the immortal non-humans) will die as time catches up with them. Since Matilda is one of the galvanized — her brother stitched her into the body of a girl who survived the experiment but has been sleeping all these years — she will also meet her demise.

I admit, I was almost worried because usually in a trilogy, book two can be quite a boring filler. Book one builds the set up, and book three is the major conclusion … so book two could go either way. However, Infinity Bell is an action driven book; the adrenaline is high from beginning to end it’s like riding a roller-coaster. There is not a lot of info-dump here, since the world-build has been done in book #1. Instead, as a reader, I was practically running with Tilly and the others to reach the final point.

Monk doesn’t waste time (or page), she gives twists and turns from every corner, that just when I thought I could take a breath, she slammed me with another jaw-dropping scene. On top of that, the House politics, with allies and enemies, along with creepy manipulative chapters from the villain Slater Orange, gives a maximum impact for readers to keep reading.

I must say that the ending is both frustrating and brilliant. I couldn’t say anything specific because it will be a spoiler, and I think this is the kind of ending that one must experience for themselves. See, the ending is frustrating because Devon Monk introduces a game changer story-line that just turns the whole situation upside down. However, it is also brilliant since everything in this trilogy basically started with an experiment of time travel gone wrong. When one thinks about that, well, the ending is a smart way to end this book and makes us wanting book #3 to come faster.

As for the romance part, it takes a couple of steps back as Abraham Seventh, who is Tilly’s love interest, regains his health from being heavily wounded as they are all on the run. So there are no lovey-dovey scenes between the two. However, we get a different kind of romantic treat from new secondary character, Gloria, who is presented as someone who has a ‘relationship-history’ with Quentin Case. The tension and emotion between the two was really good, and I would love to know more about their history. I really loved all the characters here … and the villains were worthy adversaries, because all I wanted was for them to die a slow and painful death.

In conclusion, an outstanding sequel, and one of my favorite reads so far in 2015. I can’t wait until September for Crucible Zero, which will be the final conclusion. I hope it will be another exhilarating read.