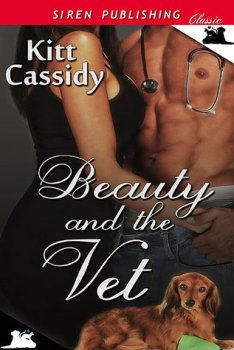 Blurb: For the past three years, Dr. Alan Booth has been watching his office manager Hannah Owens, wishing he was able to find a way to tell her how he feels about her. Fear of rejection and risking their friendship has kept him quiet. That is, until he overhears one very naughty phone call.

Hannah has been in love with her boss for years. The quiet doctor who takes care of his mother and is so good with the animals in his care has had her melting since day one, but issues with her curvy body keep her blind to Alan’s gentle advances. Tired of her sister’s constant moping, Candice Owens hatches a crazed plan to get the two love birds together if it kills them. When their plans are overheard by the good doctor himself it’s a race to see who comes out on top, the Beauty or the Vet.

Hannah’s been working with Alan at his vet clinic for years and since they met, has had an undeniable attraction to her boss. She wants more than just a working relationship with Alan but is unwilling to take that final leap. Alan’s felt the same but he’s afraid Hannah doesn’t feel the same as he does. With a charity ball coming up, Hannah’s sister convinces her it’s the perfect time to finally snag Alan but when Alan gets wind of Hannah’s plan, is he willing to let himself be seduced or does he have a plan of his own to win over the woman of his dreams?

I’m such a sucker for books with co-workers in it but especially when it’s the boss/subordinate type dynamic. I just really love that whole closeness but can’t cross that line vibe. With this one, I really loved that Hannah and Alan were so close while just a step away from being in a relationship. I mean, they were going on ‘dates’ without actually calling them dates. It was adorable and I loved that they were both so in love with the other while not willing to lose what they had by trying to become something more.

While I adored their relationship, I was a little frustrated with Hannah’s big plan. The whole time they were planning it and when it was actually happening, I couldn’t help but wonder how Hannah would think just covering up her face would disguise her identity, not when it was obvious Alan knew her so well. And then I started wondering why she thought Alan would just have sex with a complete stranger without at least wanting to know who he was having sex with… they never exchanged names while Hannah was “Beauty” and she never took her mask off. I just felt like that whole scenario was a stretch that wasn’t as explored or developed as it could have been.

In the end, this was an adorably sweet story. I absolutely loved the boss/employee aspect and how much they were both yearning for the other but unwilling to move to the next level. I wished it had been a little more creative and developed on the whole ‘scheme’ but it was still a nice little ride and I enjoyed the author’s writing. I’ll definitely be checking out more of her stories 🙂