Book Review: He Completes Me by Cardeno C. 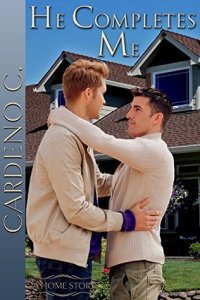 Blurb:  Not even his mother’s funeral can convince self-proclaimed party boy Zach Johnson to tone down his snark or think about settling down. He is who he is, and he refuses to change for anyone. When straight-laced, compassionate Aaron Paulson claims he’s falling for him, Zach is certain Aaron sees him as another project, one more lost soul for the idealistic Aaron to save. But Zach doesn’t need to be fixed and he refuses to be with someone who sees him as broken.

Patience is one of Aaron’s many virtues. He has waited years for a man who can share his heart and complete his life and he insists Zach is the one. Pride, fear, and old hurts wither in the wake of Aaron’s adoring loyalty, and as Zach reevaluates his perceptions of love and family, he finds himself tempted to believe in the impossible: a happily-ever-after.

He Completes Me is set in the Home series where the books are linked by theme or world. They are independent and can be read in any order.

Review: We meet Zach at his brother’s house getting ready for his mother’s funeral. His mother and step-father had disowned him years ago, and since he was 17, Zach has been living the life of a party-boy in LA. He comes back to small town USA with the idea that he will only be here for the funeral and then probably never again.

Aaron is Zach’s brother’s best friend. He’s a veterinarian who has never loved any man, but has had one serious boyfriend who died of cancer early in life. He’s very lonely, but he knows “the one” is out there and waiting.

When Aaron meets Zach, he knows he’s “the one”. Zach thinks there is no way he can possibly commit to just one guy, especially a guy who lives halfway across the country in a town he never wants to see again.

Though Zach hurts Aaron time and again, Aaron’s love is unwavering, and he slowly erodes all of Zach’s excuses for their separation.

Eventually, Zach and Aaron do become lovers and then more. When the epilogue is complete, we have the happiest of happy endings to keep us warm on a cold winter’s night!

This is probably my favorite of the Home Series stories. Zach is my favorite character! I love when Zach “breaks the fourth wall” and talks to us, the audience. It’s hysterical! Aaron is so steadfast and true and your heart bleeds for him when Zach smashes his heart over and over, but you can’t help but still love Zach because he’s so honest and up-front about it all.

Aaron’s oral fixations are HOT, and Zach is so outgoing, the sex between them is scorching!
Though I wanted to strangle Kimmy and Dean, I loved Aaron and Zach to pieces.

(Paul Morey narrates the audio version of this and is absolutely fabulous!)

One thought on “Book Review: He Completes Me by Cardeno C.”