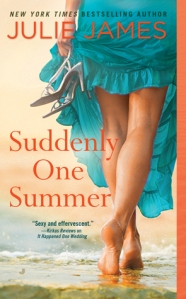 Blurb:  Divorce lawyer Victoria Slade has seen enough unhappy endings to swear off marriage forever. That doesn’t mean she’s opposed to casual dating—just not with her cocky new neighbor, who is as gorgeous and tempting as he is off-limits. But once she agrees to take on his sister’s case, she’s as determined to win as ever—even if that means teaming up with Ford…

Investigative journalist Ford Dixon is bent on finding the man who got his sister pregnant and left her high and dry. He’s willing to partner with Victoria, despite the fact that the beautiful brunette gets under his skin like no other woman. He might not be looking to settle down, but there’s no denying the scorching attraction between them. Still, the more time he spends with Victoria, the more he realizes that the one woman as skeptical about love as he is might be the only woman he could really fall for…

Review: Ever since I first read Julie James  Something About You three years ago, I associate her stories with “current”, “sassy”, “smart”, and “modern”. This latest by James doesn’t disappoint as it brings her trademark of modern romance with a touch of witty banter between the smart heroine and the perceptive hero.

After a break-in triggers her panic-attack, Victoria sold her house and bought a new place to live. While waiting for the sale to close, she rents a loft condo next door to Chicago Tribune investigative journalist Ford Dixon. While the first impression might not be so compelling for both of them – she thinks he is a juvenile with cavalcade of women revolving though his door, he thinks she is snarky and judgmental – but Victoria and Ford soon find themselves working together when she takes Ford’s sister as a client and they try to find his niece’s father.

Victoria is definitely the confident successful modern woman that I would expect coming from a James book. I loved reading about her clients and her cases. However, Victoria is not without a personal problem of her own. Victoria’s panic disorder and her distrust over relationships stems from childhood issues, when her parents divorced at the age of ten. In addition to working as a divorce lawyer, of course, where she sees first-hand how even couples who have been married for long time can turn bitter and hateful.

And this is what I enjoyed reading about James’ character. Victoria deals with her problem by going to therapy, but even so, she shows her strength. Victoria’s therapy sessions were a delight to read. There is a mix of humor alongside serious discussions in dealing with her problems. I loved that Victoria doesn’t back down from challenges that her therapist gives her – she wants to get better – but at the same time, she can still deflect a couple of issues in a smart way. It is really great to read about therapy sessions where the main character is not being sarcastic and uncooperative. Because hey, those sessions are helpful, right?

While Ford – okay, I admit, I don’t really remember him much from Love Irresistibly where he first appeared as Brooke’s best friend, but it didn’t matter. Ford captivated me from the get go. I loved his loyalty towards his family, especially the way he helps his sister. The scene where Ford is babysitting baby Zoe on his own was one of the highlights of this book. Sure, Ford shows the typical bachelor’s attitude in romance novels, one who stays away from long-term relationships. However, Ford is also a genuinely nice guy and as a journalist, he is very perceptive on Victoria’s personal issues. This combination made me root for him to finally win Victoria’s heart.

I loved that their road to happily ever after didn’t feel predictable. Ford and Victoria struggle with love and commitment, and they both have solid arguments about it, so the way they are working on their relationship is something I truly admire. It comes from respect, hard work, and a little blind faith. I could easily see how they would be, ten-twenty years down the road. They will be the kind of couple who know that they could not just depend on fate to stay together; but they will do what it takes (even, for example, going to a couples therapist if necessary) because they know that the end result is worth it.