Posted on August 29, 2015 by thebloggergirls 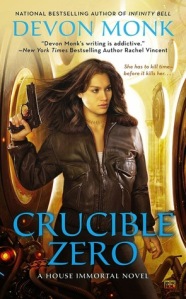 Blurb:  Matilda Case never thought of herself as a hero. But because she is galvanized—and nearly immortal in her stitched, endlessly healing body—she doesn’t have much of a choice. Even if she doesn’t want to save the world, she’s the only one capable of traveling in time to do so.

But her rescue attempt hasn’t gone as planned. She’s stuck in an alternate universe, and her world is in danger of disappearing. Worst of all, an unfathomably powerful man who can also travel through history doesn’t want her to put things to rights. He’s willing to wage bloody war to stop Matilda, unless she surrenders control of time to him.

Now, with the minutes ticking, Matilda must make impossible decisions, knowing that one wrong choice will destroy her—and any chance of saving everything she loves…

Review: Crucible Zero immediately picks up from where we left off. In the previous book, Matilda Case was able to travel back in time, in order to correct the Wings of Mercury experiment conducted by Matilda’s great-great-great grandfather. However, the result brings Matilda to an alternate universe instead – in this timeline, her families are alive, the galvanized are mercenaries (instead of ‘celebrities’), and there are widespread plagues that hit the world each decade and wipe millions of people. In addition, the Houses are now divided into mainly two Houses – Fire and Water, with additional House Earth used to be made up of a loosely connected network of people, each living on their own piece of land. What stays the same is that Slater Orange, who now leads House Fire, is still on mission to kill Matilda – the only one knows about his real identity…

Devon Monk’s House Immortal series was one of my most memorable new series last year. I already love Monk’s previous works, but with this, she elevated herself to a whole new level. The world she created – combining urban fantasy and element of science fiction – felt unique and refreshing.

Well, Crucible Zero is the final book, and I could only say this… it was perfect. Bloody Perfect. I couldn’t ask for a better ending of the trilogy!

There are a LOT of Matilda’s awesomeness moments – seriously, this girl kicks ass!! One major difference from previous ones was the fact that this time Matilda didn’t have to share the spotlight with anyone. In the previous two books, we had chapters from the villain – Slater Orange – so we knew what he was thinking. In Crucible Zero, all chapters are from Matilda’s perspective, as she was planning to take down Slater once and for all.

As always, Monk plots her stories tight, and I was mesmerized from the get go. Readers will discover what the major characters are doing in the alternate universe (and I had fun guessing *laugh*) as Monk moves the story forward in a fast but controlled pace. In addition to high-octane action adventure, readers are also being treated with more romantic moments this time, between Matilda and Abraham Vail.

Bottom line, Crucible Zero is a stunning conclusion in an already excellent series. This is why I keep Devon Monk on my list of favorite urban fantasy authors! I can’t wait to read future stories from her.